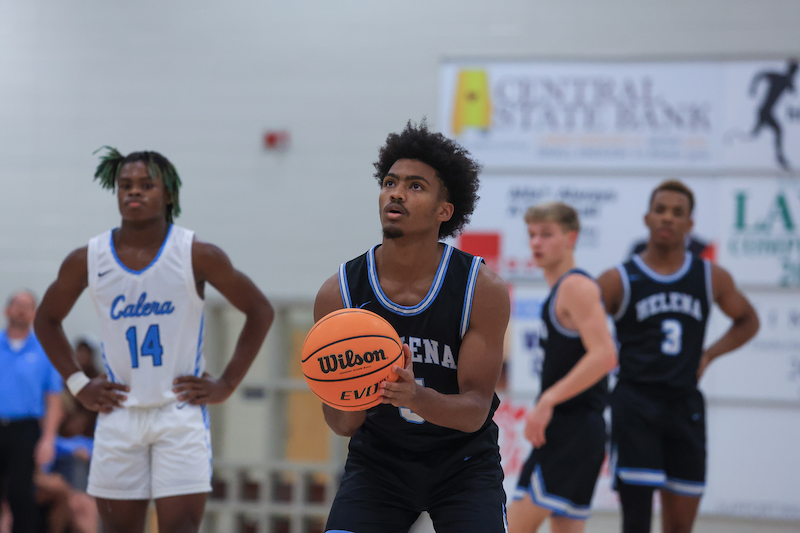 HOOVER – Helena’s boys basketball team competed in Hoover’s Big Orange Classic just days before the ball dropped on New Year’s Eve. The Helena Huskies finished 2022 10-8 after knocking down a couple of wins during the three-day tournament.

In the opening round of the Big Orange Classic, the Huskies took on the Northridge Jaguars. The Jaguars fell to the Huskies 70-47 on Wednesday, Dec. 28. Josh Williams led Helena with 17 points knocked down in the first round.

Ian Johnigan followed Williams after picking up 15 points of his own. Owen Davis knocked down 11 points in the Huskies’ matchup against the Jaguars. Joseph King scored nine points, Jacob Satterfield pulled away with eight points and Torrey Ward tagged on seven points.

After their first-round victory against Northridge, the Huskies advanced to the semi-final round against the Hillgrove Hawks. Helena faced a little more adversity in the second round. Still, they managed to pull away with a 55-52 victory and secured them a spot in the championship round against No. 2 in the 7A classification the Hoover Buccaneers.

Williams carried the Huskies again in the second round with 24 points knocked down. Johnigan totaled 10 points. King followed Johnigan with nine points.

The championship round started with a strong offensive performance from the Buccaneers. In the process of picking up 27 points, Hoover limited Helena to only eight points in the first quarter.

Helena was able to finish the half with an additional 10 points, however, the Buccaneers continued to extend their lead by knocking down an additional 16 points in the second quarter.

Returning to the court in the second half, Hoover continued to be a dominant presence within the paint. The Buccaneers knocked down another 18 points, while Helena could only total three points in the third quarter.

Helena’s defense applied pressure on Hoover during the fourth quarter and limited them to 12 points. The Huskies’ offense managed to outscore the Buccaneers for the first time in the championship in the final quarter with 13 points total before the game concluded.

Helena fell to Hoover 73-34 and finished in second place in the Big Orange Classic.

The Huskies take on Chelsea at home on Wednesday, Jan. 4.