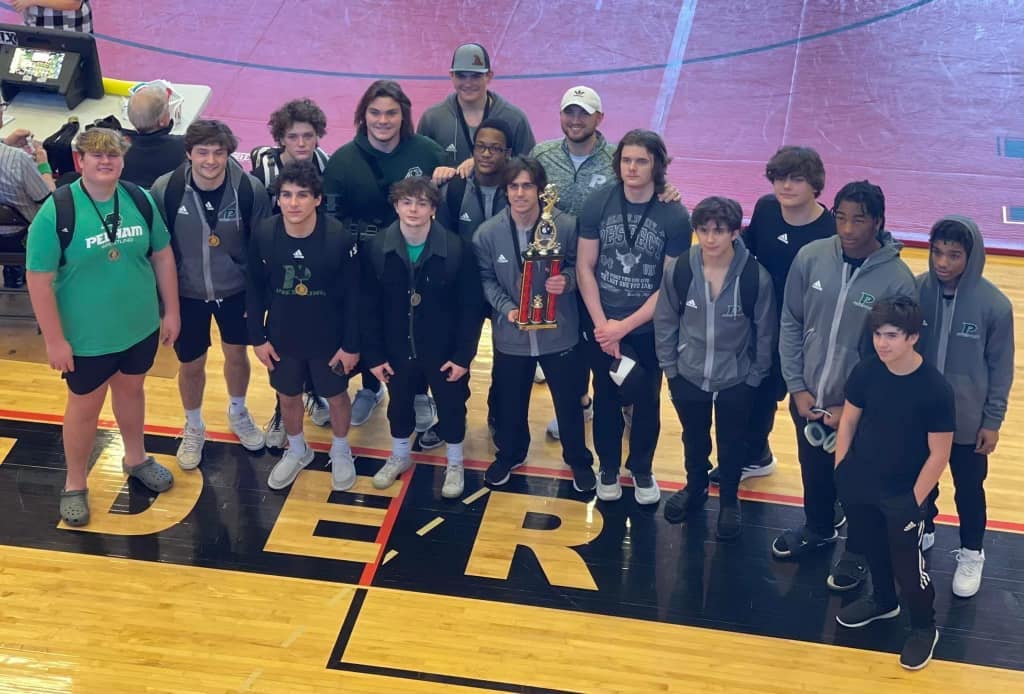 The Pelham wrestling team walked away with the championship at this year’s ALX Invitational in Douglasville, Georgia on Dec. 28. (File)

DOUGLASVILLE, Georgia – It was a successful holiday trip to Douglasville, Georgia for the Pelham Panthers’ wrestling team on Wednesday, Dec. 28.

Taking on several top wrestling teams from the state of Georgia as well as one from Ohio, the Panthers not only walked away as champions, but they did so by 44 points.

Pelham totaled a score of 233 in the event with the next closest team scoring 189 points.

For the varsity wrestlers, four different wrestlers walked away with individual titles at the event.

Walt Calvert was the first to do so for the Panthers in the 126-132 weight class. He picked up three consecutive wins with a quarterfinal tech fall, a semifinal pin and a championship match major-decision victory of 16-5.

Noah Schilleci also had an impressive performance to finish first in the 150-pound division. Schilleci picked up back-to-back pins to start his tournament before finishing it off with tech fall victories in the semifinals and championship.

Wrestling in the 190-pound weight class, Seth Branham also put together a strong run, making easy work of two opponents. After a bye earned him a spot in the championship, he picked up back-to-back pins in the semifinal and championship matchups to walk away with another victory for the Panthers.

That set the stage for Cash Tatum in the 285-pound division. The heavyweight wrestler added one last first-place finisher for the varsity squad. After a bye in the first round, he matched Branham’s success with back-to-back pins from there to walk away as an individual champion.

Beyond those first-place finishes, the Panthers had four other varsity wrestlers finish second at the event.

Nicholas Bamberg did so in the 113-120 classification. He won his first match with a pin before dropping his next two in a decision and major decision loss, but he bounced back with a pin to earn 10 points for his team.

In the 138-pound division, Thomas Peerson picked up a major decision win in the quarterfinals and a tech fall victory in the semifinals before falling in a tightly-contested first-place match via 13-6 decision.

Brayden Patterson and Tanner McCarthy were the final two wrestlers to earn finishes of second at the event for the Panthers.

As for the junior varsity wrestlers, Patrick Warner and Malachi Dahlen were the highlights with wins in their weight classes. Warner picked up three consecutive pins to win the 106-pound weight class, while Dahlen earned a major decision, a bye and a pin en route to his win.

Warner’s win in the first-place match came against teammate Paul Peerson, who picked up a pin and a forfeit win in his first two rounds before being pinned by Warner.

Luke Tharpe (138) and Robert Darrenkamp (150) both finished fourth in their respective weight classes as well.