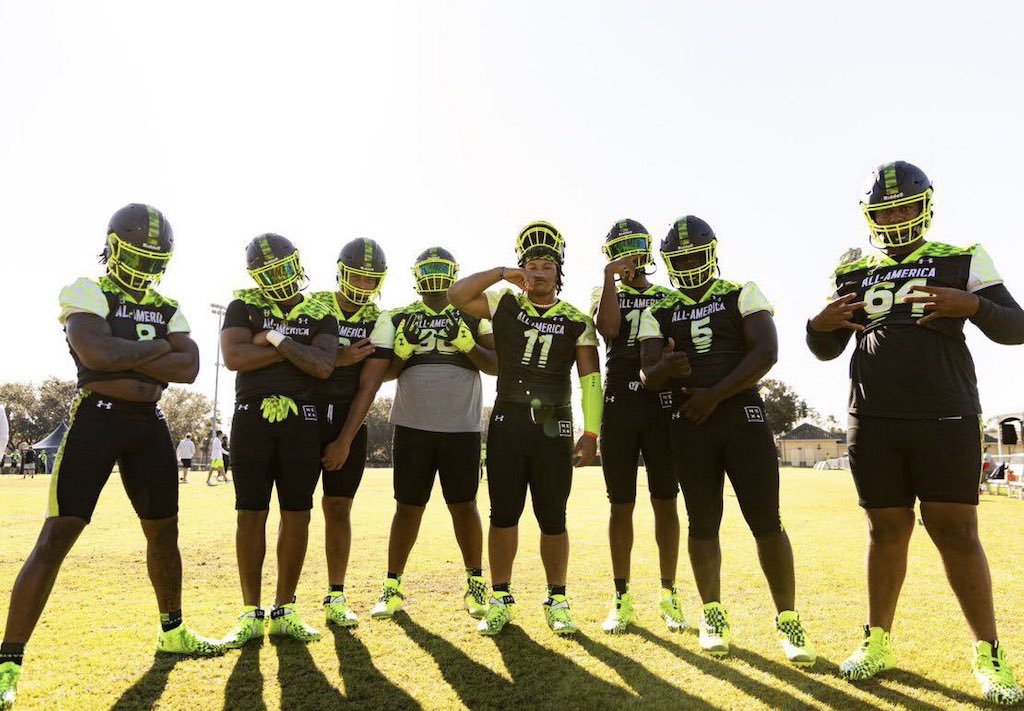 Peter Woods had an impressive Under Armour All-American game on Tuesday, Jan. 3, while Thompson teammates Stanton Ramil and Tony Mitchell joined him. (Contributed)

The Thompson High School senior and future Clemson Tiger competed in the Under Armour All-American game inside Orlando’s Camping World Stadium and shined one last time before turning his attention to the Tigers.

During the game, which pitted Woods’ Phantom team against the Speed team, Woods was part of a special defensive performance for his team that saw them hold team Speed to seven points in a 14-7 slugfest victory.

For much of the night, Woods, who was micd up for ESPN during play, was in the backfield causing issues for the opposing offense.

That led to him finishing the game with three total tackles, including two for a loss, while he also broke up one pass by tipping it, which eventually led to an interception.

“I saw that it was going to be a quick pass, RPO,” Woods said during the broadcast on ESPN. “I was peaking. I saw that he didn’t get the ball to the running back, so I knew he was about to try to throw the ball quick, so I kind of just anchored down, got my hands up and mirrored the quarterback.”

A five-star player and the No. 1 defensive tackle for the class of 2023, Woods finished his senior season with 89 total tackles, 24 tackles for loss and 11 sacks against some of the state’s and country’s most talented teams.

The All-American game provided another chance for him to display that success on the national stage after he won the MVP of the Alabama-Mississippi All-Star game weeks earlier.

“(This game) allowed me to show I can dominate top competition,” Woods said on ESPN. “I feel like I’ve done that in practice this week and in the game here.”

Woods was one of three Thompson players to compete in this year’s UA All-American game as teammates Stanton Ramil and Tony Mitchell joined him.

Ramil had a key play early in the second quarter that led to the first score of the night. The offensive lineman set the outside edge with a strong block that paved the way for Cedric Baxter Jr. to get around the end for a 13-yard touchdown run.

A 6-foot-7, 310-pound lineman, Ramil is considered one of the top 300 players in the country and is headed to Michigan State.

Like the other two, Mitchell is headed to a premier school and will join Nick Saban’s squad at the University of Alabama.

Mitchell has been ranked as high as a top 15 recruit in his time at Thompson but fell back slightly this past season. He is, however, still listed inside the top 25 by ESPN and the top 80 by others.