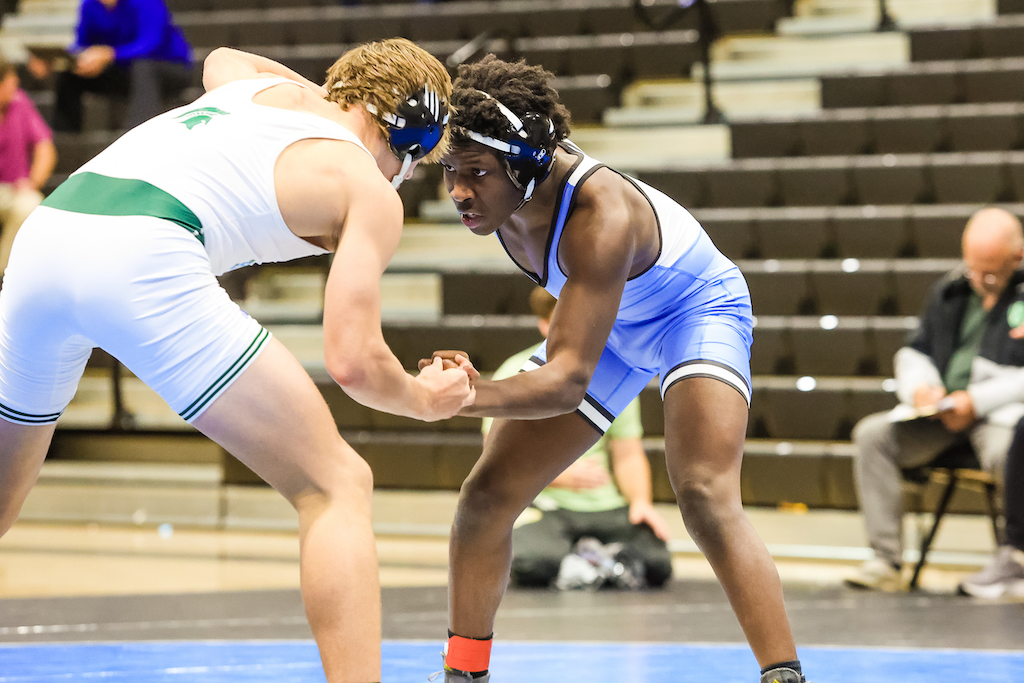 HOOVER ­– Featuring a total of 24 teams, the Spain Park Jaguars and Oak Mountain Eagles both had their share of success at this year’s Scott Rohrer Invitational hosted by Hoover High School Dec. 30-31.

The two local wrestling teams went up against some of the state’s and southeast’s best and put together strong performances with the Jags finishing third overall and the Eagles claiming 13th.

Spain Park finished the event with 430.5 points, finishing just behind Catholic (Louisiana) with 546 points in first and Montgomery Bell Academy (Tennessee) with 501 points.

The Jaguars also finished just ahead of crosstown rival and host Hoover, who totaled 399.5 points to finish fourth.

Spain Park’s impressive tournament featured eight wrestlers claiming a spot inside the top five, three in third place, one in second and two in first.

Williams put together a thrilling run to the top spot in the 140-pound division, starting with a tech fall and pin before receiving two byes. He then used back-to-back pins to earn a spot in the semifinals, winning a 6-4 decision there to grab a spot in the championship match.

In that first-place match, he picked up a thrilling 12-11 ultimate tiebreak victory over Homewood’s Sam Sutton to claim the title.

Conlon’s success came in the 184-pound weight class, as he won eight consecutive matches to take home the title.

He started his run with a pin before receiving two byes. He then picked back up with three pins in a row to earn a spot in the semifinals. Conlon followed that success with back-to-back decision wins of 6-0 and 7-2 to earn the championship win.

Thomas Hardy also had an impressive tournament in the 162-pound weight class, finishing second after a strong run to the championship match. He picked up three pins, a major decision and two decision wins to earn a spot in the first-place match.

Taking on McAdory’s Christion Griggs, he fell via major decision in the title to take home a finish of second.

Beyond those three, Jackson Mitchell, Kyle Oliveira and Rayshod Burts each finished in third.

Mitchell did so in the 172-pound division thanks to wins in his first four matches via three pins and one decision. That earned him a spot in the semifinals where he dropped a tight sudden death matchup by a score of 6-4. Mitchell, however, bounced back with a tiebreak win in the third-place match.

In the 222-pound weight class, Oliviera picked up five pins and a bye in the first six rounds to earn a spot in the semifinals. He ultimately fell in the semis, but responded with a 4-2 sudden victory in the third-place match.

Burts had similar success in the 287-pound division, winning his first five matchups with three pins, two byes and a decision of 4-2. He then fell in a tight 3-1 decision in the semifinals before responding with a 2-1 decision victory to claim third.

Philman earned three straight byes to start the tournament before starting with a major-decision victory of 14-2. He then lost his next round but responded in the quarterfinals with a pin to earn a spot in the semis. After losing in the semifinals, he ultimately fell short in the third-place match with a 15-5 major-decision loss.

Shanks won his first two matches with pins before dropping two straight. He then responded in a big way with a pin and 3-2 decision to claim the fifth-place match.

As for Oak Mountain, the Eagles were led by Camden Tipton, who put together a strong run to the 115-pound championship.

Tipton picked up four pins and a tech fall to earn a spot in the semifinals. He then followed that success with a 10-1 major decision and a tight 5-3 decision to walk away with the title.

Thomas lost his opening match, but responded by winning five of his next six matches. That earned him a spot in the fifth-place match where he fell just short.

Trey Denny (108) finished seventh for the Eagles thanks to three consecutive pins to kick off the tournament. He followed that with back-to-back tight losses, but ultimately finished seventh with a medical forfeit from his opponent in the seventh-place match.

Beyond that, James Franklin finished ninth in the 115-pound division for Oak Mountain, while Aiden Briggs finished 10th in the same weight class.