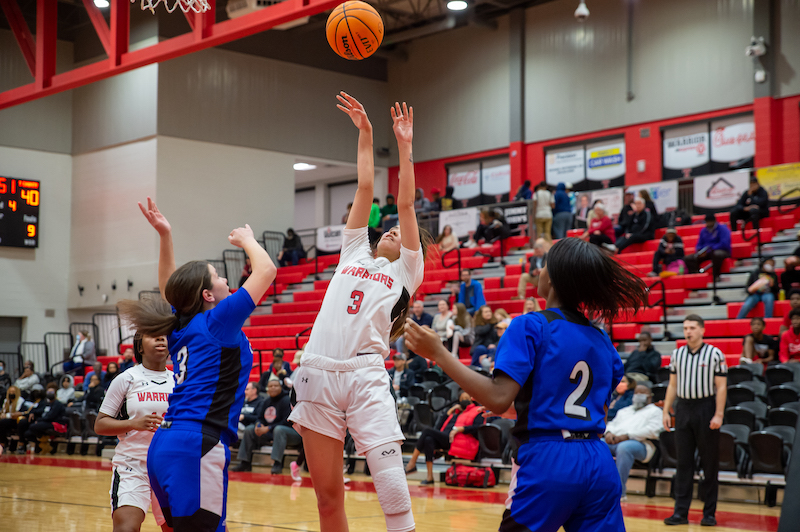 The Thompson girls basketball team won four games in a three-day span from Dec. 27 until Dec. 29 to finish their own holiday tournament undefeated. (File)

ALABASTER – In a span of three days, the Thompson girls basketball team won four consecutive games at its own holiday tournament Dec. 27-29.

The Warriors won each game by double digits with the closest being a 10-point overtime victory in the second matchup of the tournament against Hueytown.

The wins came at the right time after the Warriors had lost back-to-back games for the first time this season the week before, and now, they’ll enter the new year and area play with four consecutive wins.

In the opening game against Fairfield, the two teams battled to a 9-9 tie at the end of the opening period, but from there, it was all Thompson.

The Warriors gave up their only double-digit quarter defensively in the second period, but the offense scored 17 points to start creating some separation. With that turnaround on the offensive end, they were able to carry a 26-20 lead into the halftime break.

That became the first of three straight quarters in which Thompson scored at least 17 points, while the defense also continued an impressive game in the second half.

The Warriors put together their best frame of the game in the third quarter, outscoring Fairfield 21-8 to take a 47-28 advantage into the final period.

From there, they added 18 more fourth-quarter points, giving up just eight to pick up the 28-point victory.

A total of 13 players scored in the win for Thompson with Karlyn Oden leading the way with 10 points. Maliyah Green added eight, while junior Terrin Haynes and eighth graders Kaylee Fenderson and Jayla Forbes all finished with six.

The second game of the tournament featured a back-and-forth affair between the Warriors and Hueytown.

The Golden Gophers struck first with a 20-point first quarter that saw them take a four-point lead, but Thompson’s defense made adjustments and responded in a big way.

The Warriors gave up just nine points in each of the next two quarters, while the offense was able to score 16 for the second period in a row in the second quarter.

With that shift in momentum, Thompson took a 32-29 lead into the halftime break.

Both teams came out of the half with a defensive mindset, which led to an even 9-9 period in the third quarter before the game shifted into a more back-and-forth battle again in the fourth quarter.

Hueytown, however, did just enough to force overtime thanks to a 19-16 quarter that created a 57-57 tie.

In the extra period, however, it was all Thompson. The Warriors put together a dominant 12-2 effort in overtime to pull away for a 69-59 victory.

Later that same night, the Warriors showed no signs of tired legs in a commanding 61-17 victory against Isabella.

Thompson jumped all over the Mustangs with a 24-7 opening quarter and never looked back.

The Warriors built on that lead quickly in the second quarter with a 10-1 effort that allowed them to take a 34-8 advantage into the half.

It was part of a strong night that saw them give up no more than seven points in any quarter, while the offense scored double figures in all four.

Thompson closed out the game with a 27-9 second half to pick up the 44-point win.

A day later, looking to win their fourth and final game of the tournament, the Warriors capitalized on another fast start against Chilton County with a 20-4 opening quarter.

The Tigers didn’t have an answer for Thompson on either end of the floor, as the Warriors extended the lead to 39-14 at the half with a 19-10 second quarter.

Chilton County did come out with some adjustments in the third quarter that led to a tighter battle, but the Warriors still outscored the Tigers by one to extend the lead to 53-27 going to the final period.

The fourth quarter then looked much more like the opening frame of the game with Thompson posting a 15-4 quarter to finish off the 68-31 win.