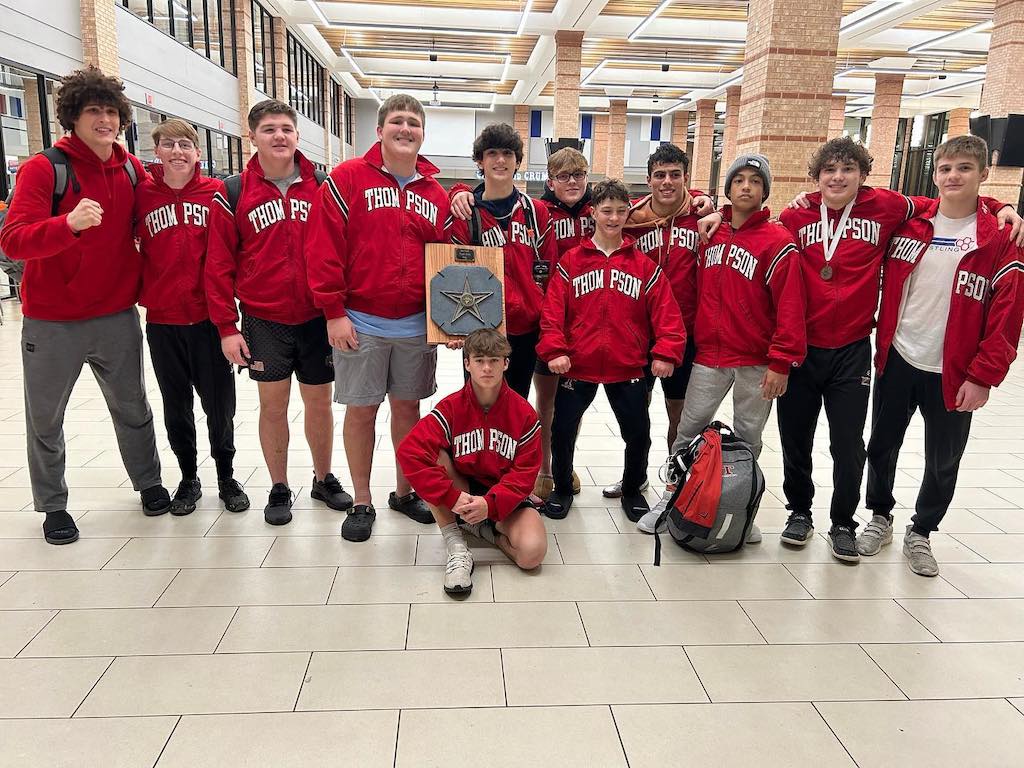 ALLEN, Texas – Competing against some of the country’s top wrestling teams at one of the year’s biggest tournaments in Allen, Texas, the Thompson Warriors ended 2022 with a bang Dec. 30-31.

The perennial power in Alabama, Thompson didn’t walk away victorious, but they did put up 458.5 points to finish third behind host Allen (656.5) and College Park (558).

With the hopes of another duals and overall state championship in 2023, the Warriors showed promise at the event against national teams as all of the wrestlers in the 12 weight classes placed in the event featuring 35 total teams.

Thompson finished inside the top 10 in each weight class with four of those wrestlers finishing inside the top five and one winning an individual title.

The lone winner came in the 150-pound weight class as Devin Stone powered his way to six consecutive wins to claim the championship.

After receiving a bye in round one, he picked up three consecutive pins to reach the quarterfinals, claimed a tight decision win, earned a sudden victory and then claimed the first-place match with a 3-2 decision to cap off a thrilling title run that earned 66 points for the Warriors.

Beyond his strong performance, three others finished fifth in their respective weight classes.

Will Atkinson did so in the 106-pound division despite a first-round loss. After being pinned in the opening round, he bounced back with four wins in a row via two pins, a tech fall and a 6-0 decision. He then went 1-2 over his next two matches before closing the event out with a pin in the fifth-place match.

In the 120-pound weight class, Thomas Giere put together an impressive tournament as well, dropping just one match the entire way. He won his first three with pins before falling in a tight 6-3 decision in the quarterfinals.

However, he bounced back with a 9-2 decision, a pin and a 9-1 major decision in the fifth-place match to earn 47 more points for his team.

Avery Clark was the final wrestler to finish inside the top five, claiming fifth in the 215-pound classification. Clark started out with two straight pins before dropping his first match.

In the quarterfinals, he fell again in a 21-9 major decision loss, but he went on to win two of his next three matches after with pins, capping off a busy tournament.

Paxton Miller (157) and Carson Freeman (165) both finished in sixth in their respective weight classes.

Miller started with four wins in a row via two pins, a major decision and tech fall before going 2-2 over his final four matches.

Freeman got off to a dominant start with four pins and a tech fall victory to reach the quarterfinals in his weight class, but he ultimately fell in the final three rounds, including back-to-back forfeits in the consolation and fifth place match.

Jordan Weltzin, Kiowa Vines and Parker Edmondson all finished one spot behind in seventh in their weight classes.

Weltzin did so in the 125-pound weight class with a record of 5-3, ultimately picking up a 4-2 decision win in the seventh-place match.

One weight class later in the 132-pound division, Vines got off to a 4-0 start before falling in the quarterfinals and third round of the consolation bracket. He did, however, earn a win in the seventh-place match.

Edmondson then did the same in the 144-pound classification. He went 4-3 through the first seven rounds before ultimately winning a tight 6-4 decision win to close out his tournament.

The only eighth-place finisher was Marley Cholewinski in the 285-pound weight class. He picked up four consecutive pins to start his tournament before ultimately losing four tight battles in a row.

Beyond those finishers, Caleb Gray-Lowe (113) and Nick Dempsey (138) each finished in ninth for the Warriors.

Gray-Lowe won three straight to start his run before dropping back-to-back matches. He then, however, finished with three straight pins to finish ninth.

Dempsey had similar success in his weight class, winning the first three matches before going 1-2 over the next three. He then bounced back with a forfeit win and a pin to close out the tournament.