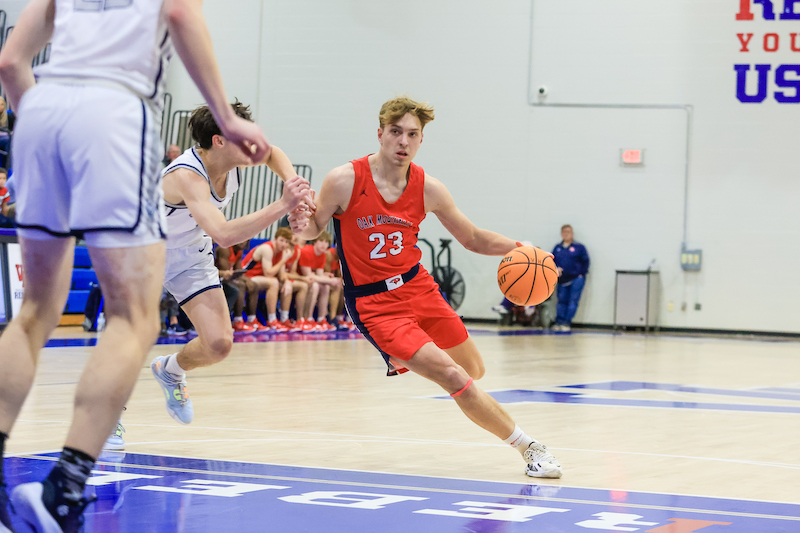 The Oak Mountain Eagles picked up a 19-point victory against Oxford on Wednesday, Jan. 4 to gain confidence ahead of area play. (File)

OXFORD – After a 1-2 effort at the metro tournament ahead of the new year, the Oak Mountain Eagles bounced back in a big way on Wednesday, Jan. 4 to gain confidence ahead of a tough stretch of area play.

The Eagles, who have been one of the hottest teams in the state to start the 2022-2023 season, began the 2023 portion of the schedule by improving to 16-4 thanks to an offensive outburst of 85 points.

Despite the lopsided final score, the game was closely contested early in the matchup with Oxford leading 18-17 at the end of the opening quarter.

The eventually fell behind 22-17 after a 4-0 run to start the second quarter from the Yellow Jackets, but from there, the Eagles turned up the pressure.

After eventually evening the score at 25-25, Oak Mountain went on a 10-0 run to start creating some separation and never looked back en route to an 85-66 victory.

The Eagles took an early 4-0 lead in the game, but Oxford responded with a strong finish to the opening quarter. They led by as many as three in the period, but a 3-pointer from Kevin Jasinski erased that deficit once, while a layup from Earnest Johnson brought them to within a point as the opening quarter ended.

The Yellow Jackets, however, responded with a quick start to the second quarter and led by as many as five points before the Eagles flipped a switch offensively.

The Eagles, however, had found a rhythm.

They came out blazing hot to start the third quarter, which led to a quick 8-0 run to extend the lead to 13 within the first 1:40 of the half.

That was part of a 16-2 run to open the first four minutes of the second half, as the Eagles went on to outscore Oxford 27-14 in the period.

That gave Oak Mountain an 18-point cushion of 66-48 heading to the final frame.

In the fourth quarter, the Yellow Jackets never could get closer than 14 points, as the Eagles extended their lead to as many as 21 at one point before finishing off the 19-point win.

It was a balanced attack for Oak Mountain that led to the successful outcome as four different players finished in double figures. Tre Thomas and Matthew Heiberger led the way with 19 and 17 points, respectively, while Will O’Dell and Grey Williams each finished with 10.