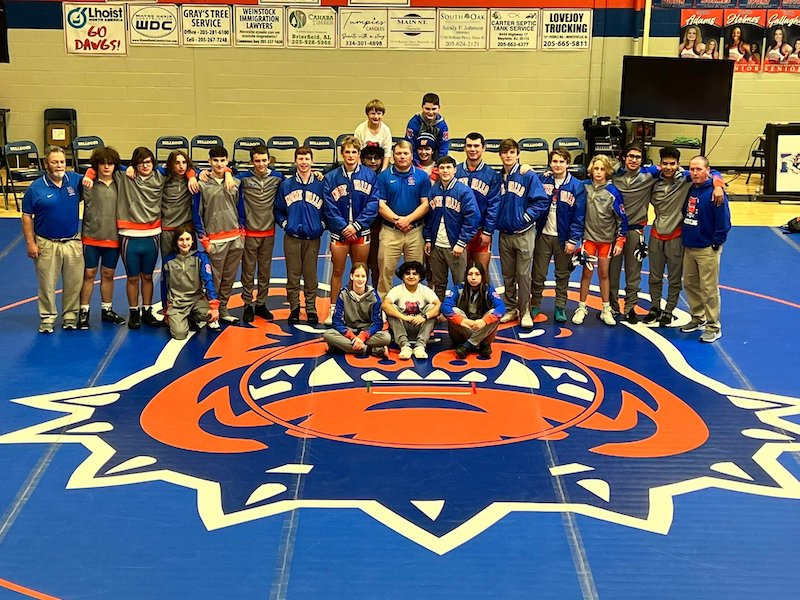 The Montevallo Bulldogs won the Class 1A-4A, Region 3 Duals Championship for the second year in a row on Friday, Jan. 6. (Contributed)

MONTEVALLO – For the second year in a row, the Montevallo Bulldogs are continuing their run in the state’s AHSAA Duals tournament after winning the Class 1A-4A, Region 3 Championship on Friday, Jan. 6.

Hosting American Christian Academy, Alabama School for the Blind, Oak Grove and Thomasville, the Bulldogs went through the tournament in dominant fashion, beating each team by at least 20 points to finish 4-0 and claim the title.

Against American Christian Academy, Montevallo put together an impressive 60-24 victory.

ACS was able to pick up wins in four different weight classes with three pins and a forfeit victory, but that only totaled 24 points, giving the Bulldogs a 36-point win.

Following that, the Bulldogs squared off against Alabama School for the Blind and had another strong showing.

The Bulldogs got help from six different weight classes being forfeited to them, while they also notched pins from Monk and Garcia.

Montevallo also got a 7-2 decision win from Gabriel Haynie and a DQ win from Paracca, while the visitors posted 12 points on a technical fall, major decision and 4-2 decision.

Now 2-0 at the event, the Bulldogs faced their toughest test against Oak Grove and fell behind in the early going.

Oak Grove took a 22-0 lead through the first four weight classes with two pins, a Montevallo forfeit and a 10-0 major decision victory.

The Bulldogs, however, bounced back in a big way with six wins in a row and nine wins in the last 10 weight classes.

Romero, Monk and Charlie Adams all posted pins the rest of the way for the Bulldogs to total 18 more points.

Beyond that, Fowler picked up a 7-2 decision win, Gabriel Haynie grabed a tight 9-7 sudden victory win, and Paracca, Garcia, Benjamin Smith (195) and Aaron Gallegos (220) all notched forfeit wins to complete a 48-28 comeback victory.

Montevallo then finished off the perfect night with another dominant effort against Thomasville.

The Bulldogs again fell behind 11-0 early, but Thomasville only managed 15 more points from there.

They also got forfeit wins from Romero, Monk, Garcia and Gabriel Haynie in the winning effort.