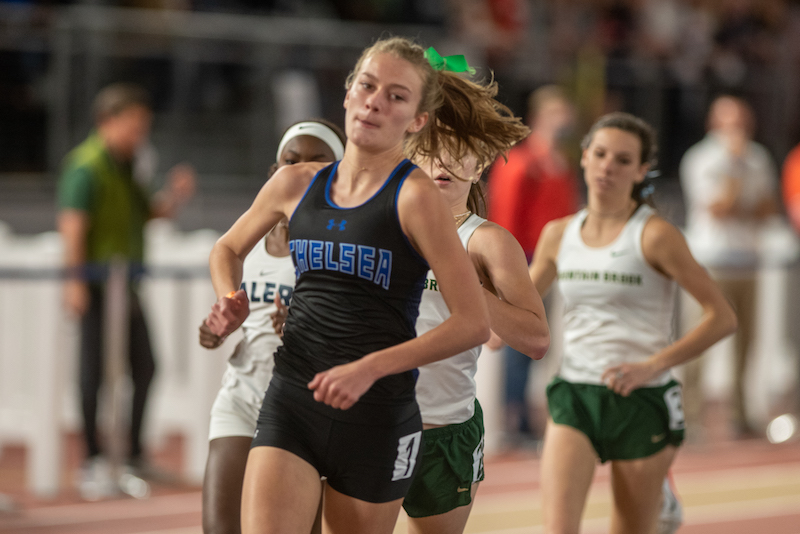 BIRMINGHAM –  Briarwood, Calera, Chelsea, Helena, Indian Springs, Oak Mountain, Spain Park and Shelby County all competed in the boys and girls events in the Ice Breaker Track and Field Invitational held at the Birmingham CrossPlex on Saturday, Jan. 7, but it was Chelsea’s Cady McPhail who stuck out from the pack.

McPhail, a senior at Chelsea, set a new indoor state record in the 1600-meter run to place first overall with a record-breaking time of 4:44.93, while teammate Ty Cason came in third place at 5:05.19.

Chelsea’s Parker Campbell was the other winner for the Hornets at the event. He placed first overall in the 3,200-meter run timing at 9:37.40. Following Campbell in ninth place, Hudson Williams timed at 9:55.19 in the event.

Mia Dunavant was also a highlight for the Hornets, finishing in fourth place with a time of 2:19.68 in the 800-meter run, while teammate Tyndal Ann Griffith came in eighth with a time of 2:26.45.

The Hornets’ relay team finished in second place timing at 4:04.33 in the girls 4×200-meter run, while Jadlyn Debardlabon added a top-five finish of fifth place in the long jump.

Briarwood’s Sallie Montgomery came in third place in the triple jump and Ansley Murphy placed seventh in the pole vault event, while the girls’ relay team finished in fourth place in the girls 4×800-meter relay timing at 10:22.66.

Calera’s Braylyn Farrington was another highlight at this year’s event, placing in the top three in two events. Farrington finished in first place with a time of 48.50 seconds in the 400-meter dash and second in the 60-meter dash timing at 6.93 seconds—a new personal record.

In the shot put event, Helena’s Brooklyn Kelley came in fourth place, while the Huskies’ boys relay team finished in seventh place with a time of 8:32.66 4×800-meter relay.

The Huskies’ Walter Womack finished 10th in the long jump, while Michael Sestili placed 10th overall in the pole vault.

Davion Foster came in sixth place for Oak Mountain in the 60-meter dash timing at 7.06 seconds and Walker Shook placed eighth in the high jump. The boys relay team finished in eighth place in the 4×800-meter relay.

Spain Park’s girls relay team finished in seventh place in the 4×800-meter run. Kenneth Bishop came in sixth place with a time of 4:29.80 in the 1600-meter run.