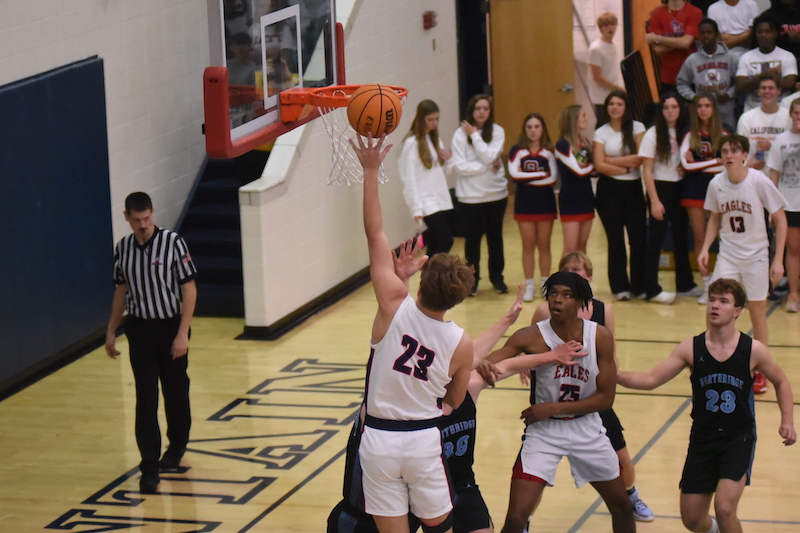 NORTH SHELBY – The Eagles gutted out a close win Tuesday night, Jan. 10 as they downed the Hewitt-Trussville Huskies 63-62.

Kevin Jasinski and Grey Williams both picked up a basket outside the arc.

Hewitt-Trussville trailed behind Oak Mountain by at least five points throughout the entire first half until they knocked down a three-point field in the final seconds before the start of the second.

The Eagles led 17-14 before the Huskies picked up seven points from the free-throw line along with four field goals totaling eight points in the second quarter.

Oak Mountain faced adversity at the end of the first half after Hewitt-Trussville’s defense applied more pressure in the paint towards the end of the half.

Oak Mountain found success outside the arc and from the free-throw line.

Williams and Heiberger both went two for two from the free-throw line. Jasinski posted two three-point fields and Eli Love tacked on a single basket outside the arc.

Devin Moss picked up a basket inside the paint for the Eagles right before the first half concluded. Oak Mountain trailed Hewitt-Trussville 34-32.

Coming back from the break, Hewitt-Trussville continued to create separation between them and Oak Mountain in the third quarter.

The Huskies posted another five points from free throws while knocking down two baskets outside the arc and five within the paint.

Oak Mountain picked up 12 points in the third quarter with five of the six field goals being knocked down within the paint. Williams posted the only three-point field goal for the Eagles before the fourth quarter.

An intense final quarter gave Oak Mountain the comeback they needed to overcome its 55-49 third-quarter deficit. With two minutes remaining of the game, the Eagles tied the Huskies 60-60.

Oak Mountain’s defense limited Hewitt-Trussville to the free-throw line. The Huskies ended the night with five free throws and a single basket in the paint.

The Tuesday night area matchup was tied 62-62 with eight seconds remaining of the game. Thomas had posted a single point early in the quarter before having the opportunity to pick up the lead for Oak Mountain.

After missing his first attempt at the free throw line, Thomas picked up the Eagles’ 63-62 after making his second free throw.

With the game clock running, Hewitt-Trussville had possession of the ball in the fleeting seconds of the matchup. Right when the Huskies went in for one final layup, Thomas knocked down their chances of an area win.

Oak Mountain travels to Chelsea on Friday, Jan. 13 for its next area matchup.