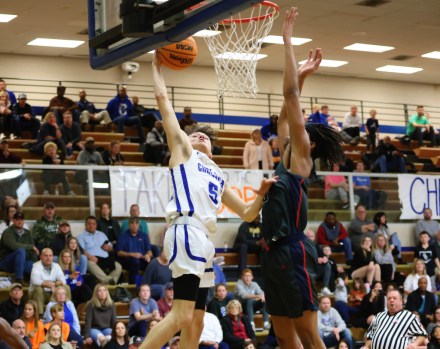 Paul Lanzi goes up for a shot during Chelsea’s 67-58 win over rival Oak Mountain. He totaled 28 points to help the Hornets pick up their first area win of the season. (For the Reporter/Cari Dean) 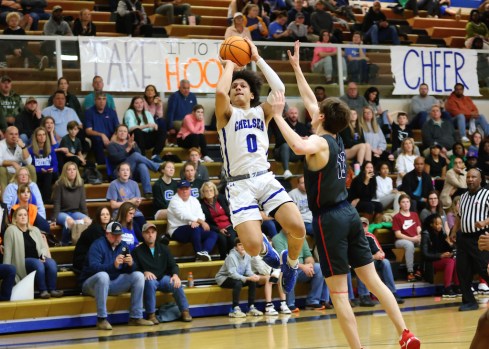 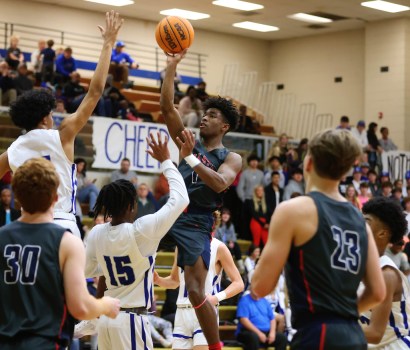 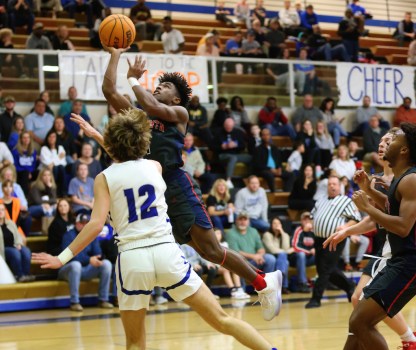 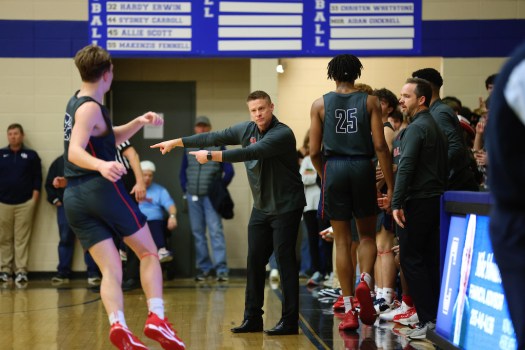 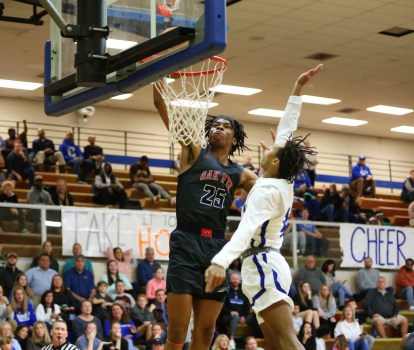 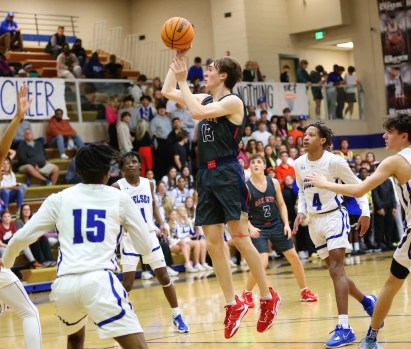 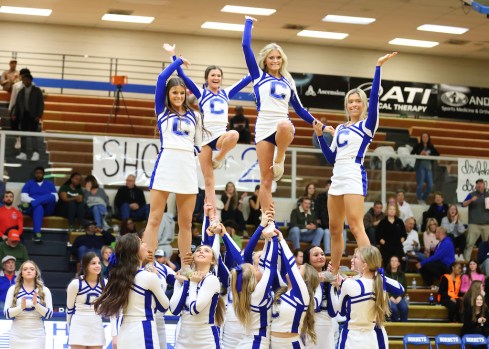 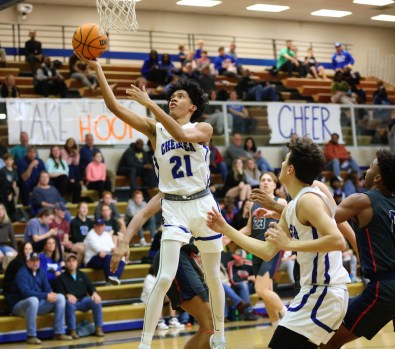 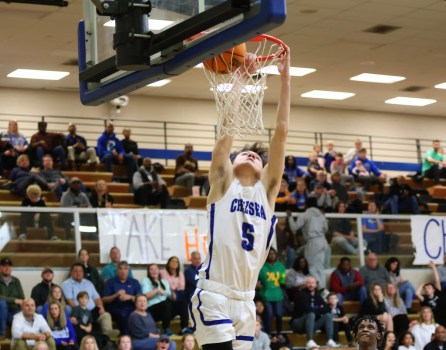 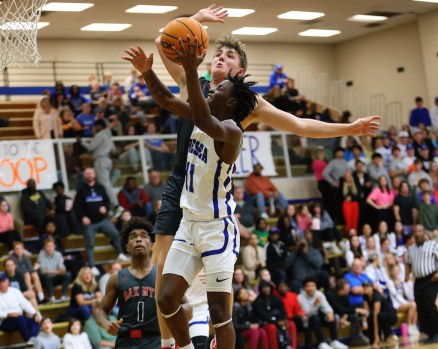 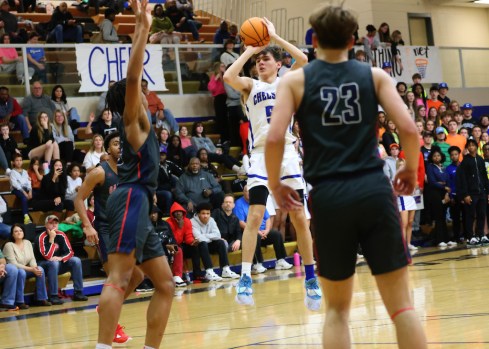 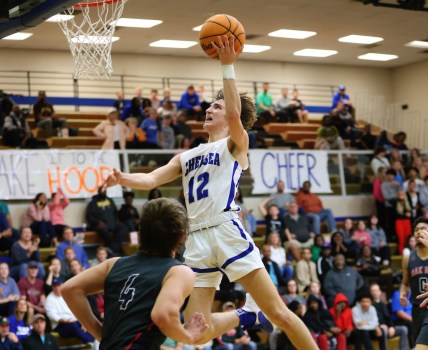 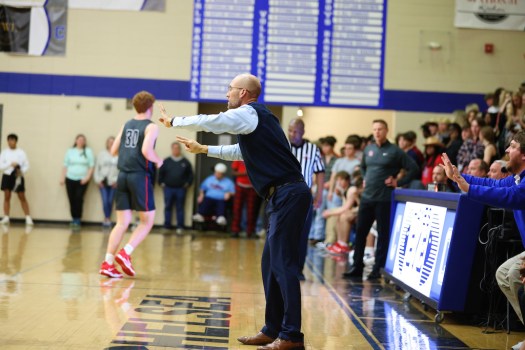 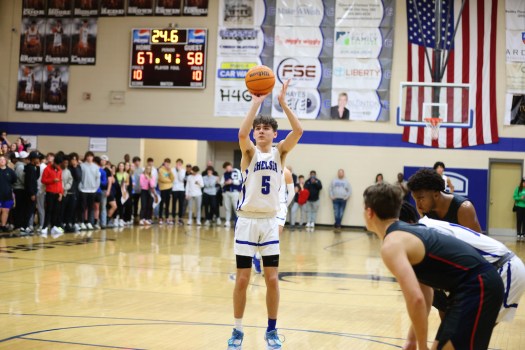 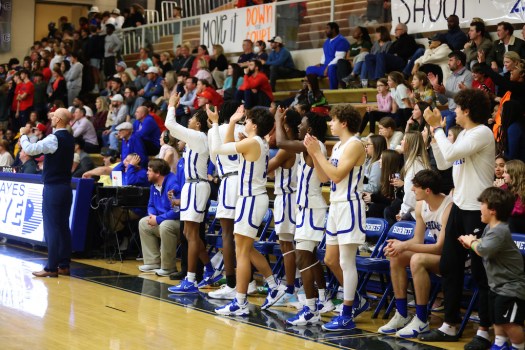 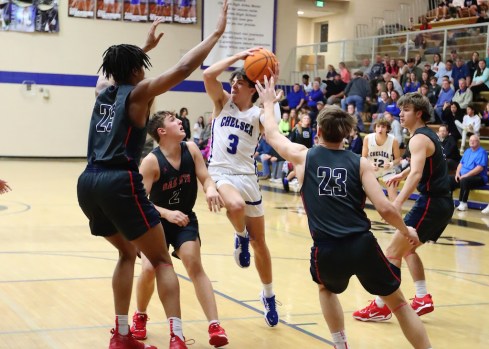 CHELSEA – The Chelsea Hornets went a combined 15-18 from the free throw line in the final quarter of a thrilling battle with rival Oak Mountain on Friday night, Jan. 13 to make the difference in a much-needed area win.

With the Eagles 1-1 in the area and Chelsea 0-2 heading into the matchup, the Hornets were looking to avoid a 0-3 start and the motivation showed throughout, especially late.

Oak Mountain took a 55-53 lead in the final quarter, but a 3-pointer from avery Futch answered, and from there, the Hornets outscored the Eagles 11-3 the rest of the way to close out a 67-58 victory.

Following Futch’s 3-pointer, the Hornets forced a turnover and then got a basket from Paul Lanzi shortly after.

He then sank two free throws on Chelsea’s next trip up the floor, and all of a sudden, the Hornets went from down two to in front by five.

That was part of a big finish for Lanzi, who made seven consecutive free throws the rest of the way to close his 28-point night with 12 points in the final quarter.

It was Futch, however, who started fast for Chelsea, while Matthew Heiberger and Tre Thomas did the same for the Eagles in a thrilling battle between the two teams.

Chelsea also got eight more points as a team to take an early 18-11 advantage.

Oak Mountain, however, fought back in the second quarter with Thomas adding eight more points and Heiberger catching fire with six. Devan Moss also chipped in four, as the Eagles went 6-6 from the free throw line in the period to total 18 points.

Chelsea did just enough to maintain a one-point 30-29 lead at the half thanks to four points each from Lanzi and MJ Conrad.

That set the tone for an exciting second half that saw the two battle back-and-forth.

Lanzi, however, was the difference in the Hornets extending the lead slightly going to the final quarter. He totaled nine points on three field goals and a 3-4 mark from the free throw line.

That helped Chelsea put together a 17-point quarter, while Oak Mountain got 15 more points behind two old-fashioned three-point plays from Heiberger.

Still, the Hornets took a 47-44 advantage into the final period.

Oak Mountain eventually took a 49-48 advantage, which led to a few back-and-forth possessions until Chelsea overcame the 55-53 deficit.

Lanzi went 10-11 from the free throw line in the final quarter in addition to a made field goal, while Futch went 2-2 from the line with a 3-pointer and Alex Redd made two free throws as well to close out the win.

Behind Lanzi’s 28 points, Futch finished with 18, while six others scored in the victory.

Oak Mountain went 6-12 from the free throw line in the final quarter, which became costly down the stretch.

Heiberger led the Eagles with 21 points, while Thomas chipped in 18 points.