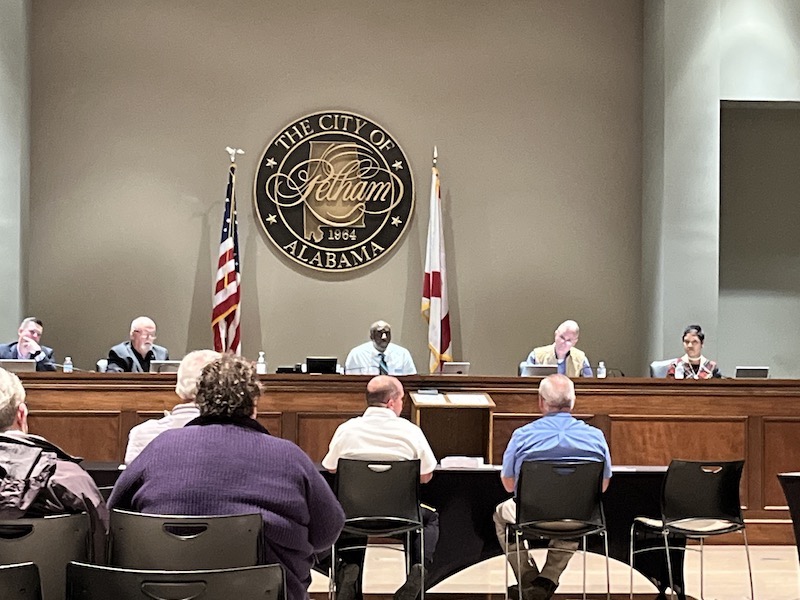 The Pelham City Council offered updates in a meeting held on Jan. 11 regarding demolition of a property on Montgomery Highway, interviews for the executive director position of the Pelham Civic Complex and updates on the Cahaba Valley cleanup. (Reporter photo/Lizzie Bowen)

PELHAM – The Pelham City Council met on Wednesday, Jan. 11 to discuss pay increases for city employees, a three-year investment in support of the “Forward Shelby County” campaign, the Cahaba Valley Creek cleanup and the demolition of city-owned property on 1904 Montgomery Highway.

“The council was approached by the Shelby County Chamber last meeting to support its campaign of “Shelby Forward,” it is the third consecutive initiative by the chamber,” City Manager Gretchen DiFante said. “Pelham has supported, the chamber for more than 10 years. They are asking for the same level of commitment, which is what the council has committed to. It certainly goes to help support our businesses, not only in recruiting, but also in workforce development, which is a big initiative for the chamber.”

Resolution 2023-1-11-02 was approved by the council. The resolution is in regards to entering a public works contract with Lakeshore Environmental Contractors for demolition of city-owned property at 1904 Montgomery Hwy.

“The council made a decision some time ago that we wanted to enhance the first part that you see in Pelham,” Councilmember Maurice Mercer said. “It may look very similar to Welborn if you’ve noticed that property just past Cozumel. We will have that same team that’s coming in and giving it a new palette, so that it is very pleasing to the eye. That goes to the council and the city’s commitment to continue to beautify the city.”

Applications are currently open for the position of executive director for the Pelham Civic Complex and Ice Arena. DiFante said nine candidates are being interviewed for the position.

“We do have the final say-so for the executive director and final approval,” DiFante said. “We will have a panel and (will) use the same process that we use for all other employees and have those interviews.”

The Pelham Communications Team uploaded its first “proof of performance” video to showcase results of the Cahaba Valley cleanup. A Facebook post was made by the city of Pelham on Jan. 10 offering updates on the process of cleaning up Cahaba Valley Creek.

A meeting will be held with those in the future for the neighborhood about the individual responsibilities of residents to maintain the area.

“We want to make sure we get information about resident responsibilities,” DiFante said. “Even if you’re not adjacent to the creek, be mindful.”

In the Pelham Employment Engagement Survey, one of the highest ranked items was, “The people in my department care about the quality of service they provide.”

The council passed a plan to increase the pay of city of Pelham employees.

“We can’t thank our employees enough for their hard work,” Mercer said. “Three percent doesn’t seem like it’s enough for all they do. We are proud to pass the three percent in the balance budget, but we hope they appreciate it in their next paychecks.”