Spain Park uses big second half to pull away from Hewitt, now 3-0 in area play 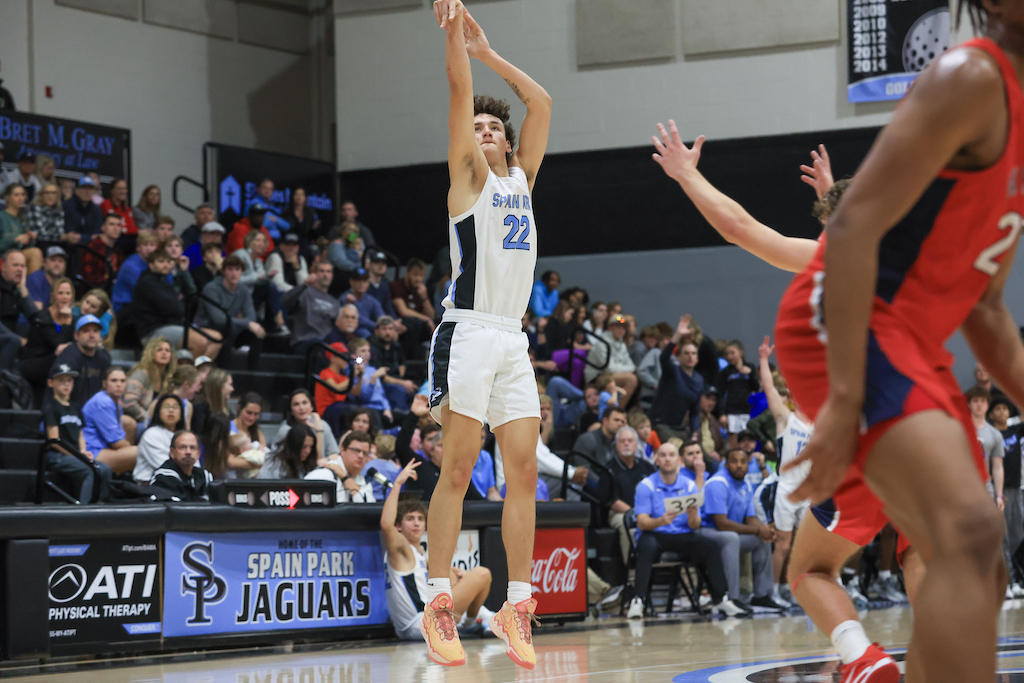 Spain Park’s boys basketball team continued an impressive season on Friday, Jan. 13 by improving to 3-0 in area play with a 20-point win over Hewitt-Trussville. (For the Reporter/Dawn Harrison)

HOOVER – The Spain Park Jaguars took a two-point halftime deficit against Hewitt-Trussville and turned it into fuel on Friday, Jan. 13, en route to a 20-point victory.

The Jags trailed 22-20 at the half but ultimately came out with adjustments in the second half that led to them outscoring the Huskies 36-14 to pull away for a 56-36 win.

With that, Spain Park improved to 3-0 in area play and has now beaten each area opponent at least once to take command of the standings as the hunt to host the area tournament continues.

It was the opening quarter that looked like it was going to be costly for the Jags early in the game.

Hewitt-Trussville’s defense came out looking to make a statement, and that’s exactly what happened.

The Huskies limited Spain Park to five points and held Zach Gray scoreless. Meanwhile, Hewitt was able to capitalize offensively with three made 3-pointers as part of a 12-point quarter to take an early seven-point advantage.

Spain Park’s offense didn’t stay down for long, however. Not only did Gray get going in the second quarter, but the Jags went a perfect 7-7 from the free throw line as well.

Sam Wright and Chapman Blevins both went 2-2 from the line, while Gray went 3-3 with a made field goal as well. Beyond that, Chase James made his impact felt as well with two made 3-pointers to help the Jaguars post 15 points in the quarter.

It still wasn’t enough to overcome the deficit, but the Jags limited the Huskies to 10 points to pull within two at the halftime break.

Following that shift in momentum, not only did Spain Park’s offense come out ready in the second half, but the defense limited Hewitt to single digits in each of the final two quarters.

Offensively, James came out in the third and picked up right where he left off before the break thanks to three bombs from beyond the arc to total nine points.

That was part of a 22-point quarter as the Jags got six from Gray, five from Hunter Herritt and two from Wright.

With the defense holding the Huskies to nine points, Spain Park went from trailing by two to in front by double digits at 42-31.

From there, Spain Park finished off the comeback victory with a big final quarter from Wright, who totaled seven points on two field goals and a 3-3 mark from the free throw line.

The Jags outscored Hewitt 14-5 in the final quarter to cement the 30-point win.

Gray, James and Wright all had 15-point nights in the victory, while Herritt added five.