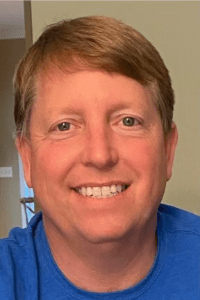 Born on May 1, 1968 in Atlanta, Georgia, he was the son of Dennis Mangham and JoAnn Gantt. While growing up in Tift County, Roger spent much of his youth involved in showing livestock. He gained many accolades for his award winning cattle over the years.

After graduating from Tift County High School in 1986, he continued his education at Abraham Baldwin Agricultural College, University of Georgia, and Valdosta State College. Roger then began working in commercial truck sales. This venture became a lifelong passion and successful career. A natural entrepreneur, commercial truck sales allowed Roger to conduct business all over North America. In 2012, Roger moved to Alabama where he presently owned and operated Mangham Truck and Equipment in Calera.

Roger had a strong and unwavering faith, and his love for the Lord could be seen in everything he did. Whether serving as a deacon, singing in the choir, coaching RA basketball, or leading music, Roger was always actively involved in church. He lived his life to a soundtrack of Southern gospel music and loved to share his faith through song. He never missed an opportunity to share the Gospel, and the overwhelming joy he had for the Lord was impossible to miss.

Not one to be idle, Roger thrived on being active. On any given day, one could find him riding his tractor, taking the boat out on the lake, or working on one of his many projects. Roger was a diehard Georgia fan. Either between the hedges, following the Dawgs on the road, or watching in the comfort of his living room, he never missed a game. Even though he lived in Alabama, he made sure that everyone knew he bled red and black.

His greatest joy was his family. He was a dedicated husband, an amazing girl dad, and the very best Papa Rog. His wife was the love of his life and very best friend. When his girls were younger, Roger spent many hours coaching travel softball, watching cheerleading competitions, and attending sorority parent weekends. He loved vacationing with his family in the mountains, taking their annual trip to the beach, and spending the weekends on his boat. However, Roger found the ultimate joy in the birth of his granddaughter, Sawyer. Being a Papa Rog came naturally to him, and he spent every possible second taking her for rides on the tractor, singing and playing with her, and spoiling her rotten.

He is preceded in death by his grandparents, Alton Mangham (Florence), Frances Mangham, Theoren Davis, and Christine Allen; and his mother-in-law, Jean Moore.

Services were held at Mt. Zion Baptist Church in Chula, Georgia on Thursday, January 19, 2023 at 11:00 AM. Interment followed at Hickory Springs Primitive Baptist Church Cemetery in Tifton, Georgia after the service.

You may offer condolences to the family at the online guest registry at www.bowen-donaldson.com. Services for the Mangham family were under the care and direction of Bowen-Donaldson Home for Funerals, Tifton, Georgia.