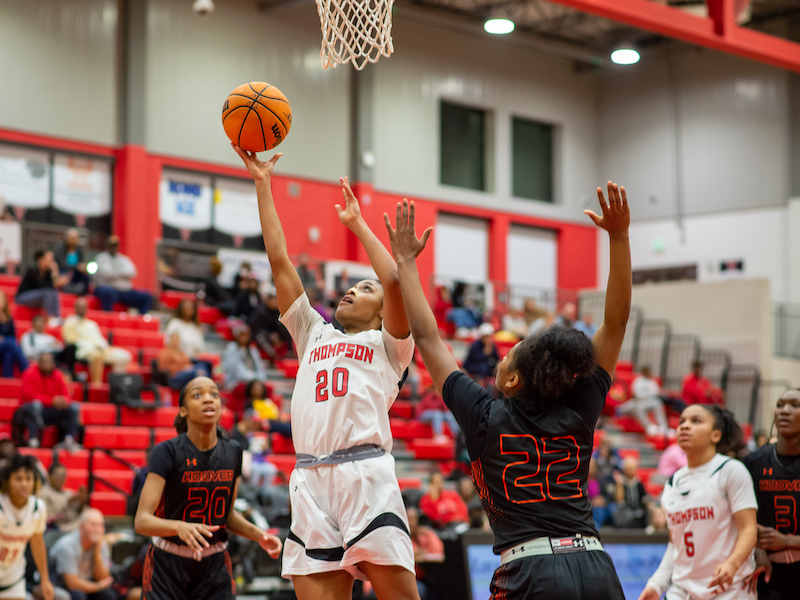 Thompson girls took down Vigor on Monday, Jan. 16. (For the Reporter/Larry Dancy)

MOBILE –  Thompson girls had an incredible offensive performance in their matchup against Vigor on Monday, Jan. 16. The Vigor Vikings fell to the Thompson Warriors 69-39.

The Warriors picked up an impressive lead in the opening quarter after dominating in the arc. Thompson led by 13 points with eight players posting a combined 20 points before the first quarter.

Maliyah Green led Thompson with a basket knocked down inside the arc and one outside the arc. Mylah Dixon tacked on a three-point field goal, while Morgan Adolphus, Natalie French, Locke Little, Zyon Gaiters, Terria Hayes and Jayle Forbes all picked up a basket in the paint.

Thompson continued to increase its lead going into the second quarter. The Warriors’ defense limited Vigor to only obtaining eight more points before the first half concluded with Thompson leading 36-15.

Forbes took the lead in the second quarter for Thompson after posting seven points. Forbes knocked down three points from the free throw line and four within the paint.

Little went two for two from the free throw line, while Karlyn Oden made the front end of a one-and-one. Green, Dixon and Adolphus totaled a combined six points.

Coming back from the break, Thompson posted another 28 points from six different players. The Warrior’s defense halted most of the Vikings’ action at the net. Vigor picked up 10 points before the final quarter of the game.

Green picked up 8 points in the Warriors’ third-quarter run from four field goals. Adolphus followed Green with two baskets knocked down in the paint and two from the free-throw line.

Little posted three points from three free throws and two points from a single bucket. French and Green tacked on four points each and Oden made another front end of a one-and-one.

Vigor applied defensive pressure on Thompson in the final quarter. Oden and Green both picked up a single basket in the paint and Jayna Chakua knocked down a single free throw.

Although the Vikings successfully were able to post 14 points before the game concluded, the Warriors had already secured their latest victory early on. Thompson beat Vigor 69-39.

Thompson hits the road to Montevallo on Tuesday, Jan 17.