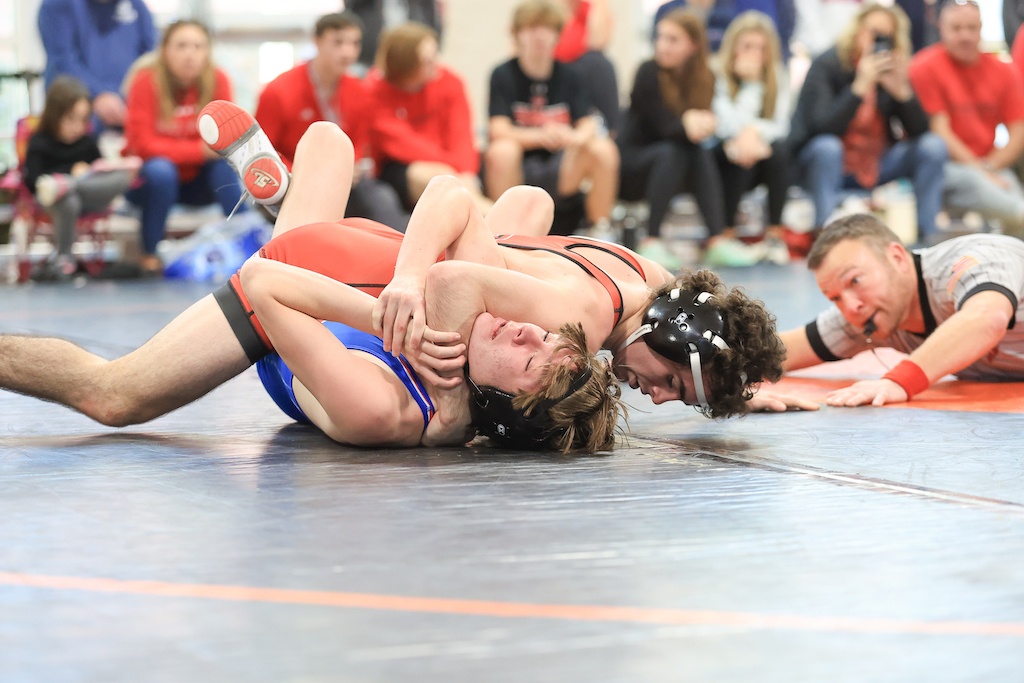 ALABASTER – It was a big weekend for the Spain Park and Thompson wrestling teams Jan. 13-14 as both teams found their way into the top two of the final standings at the 2023 Southeastern Pools tournament.

The Warriors continued an impressive season by taking the top spot in the tournament, while the Jaguars finished just behind in second, continuing a successful season of their own.

Thompson, however, was the highlight with an impressive total of 507.5 points, which topped Spain Park’s 354.5 points for first place.

The Warriors had 10 wrestlers finish inside the top three of their respective weight class with Thomas Giere earning the team’s lone win.

Giere finished first in the 120-pound weight class thanks to three pins, a major decision of 13-1 and a tech fall of 16-0.

As for the Jaguars, they had a strong contingency of winners at this year’s event with four different wrestlers claiming the top spot in their weight class.

Bradley Williams did it in the 138-pound division with six consecutive wins via pin or tech fall, Jackson Mitchell did it in the 170-pound weight class with four consecutive pins and a tech fall, William Conlon did so in the 182-pound classification with three pins and a major decision of 9-0, and Rayshod Burts found the top spot in the 285-pound weight class with two pins, a decision win and a major decision win.

Beyond those four, Nathaniel Philman (113) and Kyle Oliveira (220) both finished in fourth losing a tight 3-2 decision and 2-0 tiebreak, respectively.

The Chelsea Hornets finished the event with one second-place finisher and two in third.

Ian Osbourn was the leader in the 195-pound weight class, eventually falling in the championship match to finish second.

Tyler Rayford (145) and Porter Scott (170) both battled to eventually win their third place matches to claim two finishes of third for the Hornets.

Caiden Conolley (132) and Sloan Deweese (182) both won fifth place matches to add two more in the top five for Chelsea.

Shelby County High School’s top finisher was Nick Sykes in the 120-pound weight class. He finished second for the Wildcats with three pins and a 10-3 decision before falling in the first-place match against Giere.

Beyond him, Xander Shook finished third in the 160-pound division, while Tanner Stogner added a finish of fourth in the 285-pound classification.

Oak Mountain was highlighted by team leader Cam Tipton in the 113-pound division. The talented wrestler claimed the top spot with two pins, two tech falls and a forfeit victory.

The only other top-five finisher for the Eagles was Trey Denny in the 106-pound weight class. He finished fourth with three pins and a major decision before falling in the third-place match.