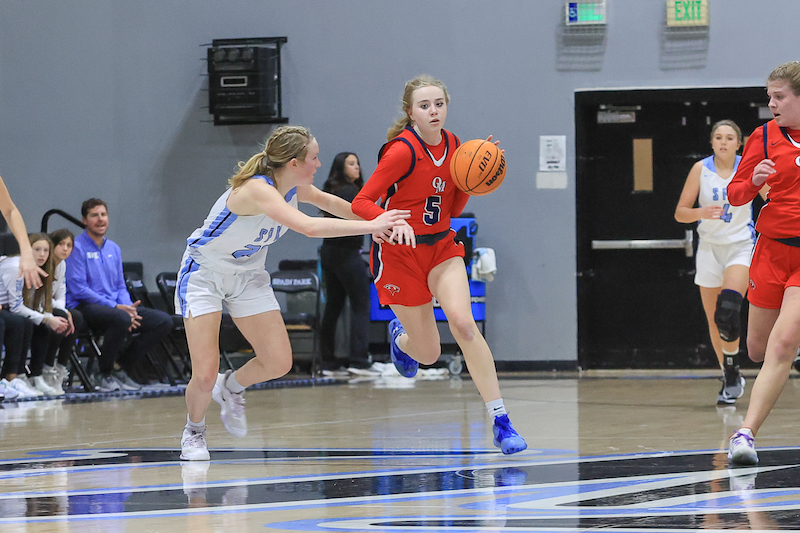 NORTH SHELBY –   Oak Mountain’s girls basketball team picked up its second area win Friday, Jan. 20, as the Eagles used a 26-point second quarter to create separation from rival Spain Park, before pulling away for a 63-22 home court victory to improve to 2-2 in their area.

Caroline Kester posted eight out of Oak Mountain’s 17 points in the opening quarter, while Reagan Whitaker knocked down three field goals totaling six points. Lucy McKeown knocked down a basket outside the arc.

Spain struggled in the second quarter after Oak Mountain’s defense limited the Jaguars to three points from the free-throw line. Hunter knocked down two free throws, and Allie Whitaker picked up one free throw.

Oak Mountain’s offense dominated in the quarter before the halftime break. The Eagles posted 26 points from four different players. Vica Hood knocked down three baskets outside the arc and one inside the paint.

Coming back from the break, Oak Mountain continued to stretch out its lead over Spain Park. The Eagles picked up another 13 points in the third quarter from three different players.

Holt went two-for-two from the free-throw line and added two field goals for a combined four points. Whitaker posted four points, while Kester knocked a basket outside the arc.

The Jaguars doubled their first-half score in the third quarter after totaling another eight points from four different players.

Tori Flournoy, Zyian Heyligar, Campbell Busby and Whitaker each knocked down a single basket in the paint for Spain Park.

Spain Park returns home on Tuesday, Jan. 24 to host Chelsea in its next area matchup, while Oak Mountain travels to Hewitt-Trussville for another area game as well.