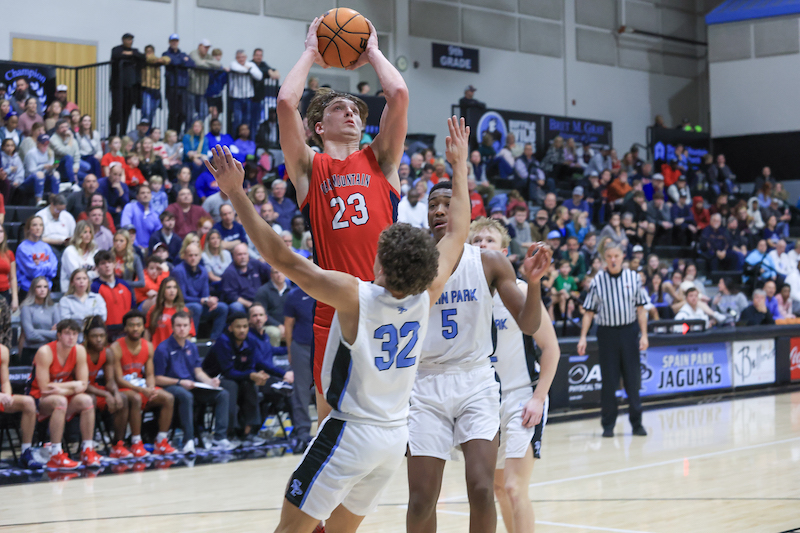 NORTH SHELBY –  Oak Mountain came into its matchup with Spain Park on Friday, Jan. 20, having lost to the Jaguars 76-39 just two weeks prior. Spain Park has been undefeated in their area with additional wins against Chelsea and Hewitt-Trussville, however, the Eagles changed that.

From the start, both Oak Mountain and Spain Park were eager to get points onto the scoreboard. The Jaguar’s Sam Wright posted the first two points inside the paint. Shortly after, Oak Mountain returned with Grey Williams knocking down the first basket outside the arc.

It was a back-and-forth battle between the Jaguars and the Eagles. Spain Park held the lead for most of the quarter until Oak Mountain tied the score 13-13 in the final minute of the opening quarter.

With just seconds remaining of the first quarter, Spain Park led 15-13 until one last three-pointer from Oak Mountain gave them the 16-15 lead going into the second quarter.

Matthew Heiberger and Kevin Jasikini knocked down a single field goal each for a combined six points for the Eagles.

Wright picked up eight points out of the Jaguars’ 15 points. Zach Gray knocked down a free throw and a field goal. Chase James tacked on two points.

Wright picked the lead right back up for Spain Park within the first minute of the second quarter after posting his only three-pointer of the night. The Jaguars maintained it for the majority of the second portion of the first half. A three-pointer from Chapman Blevins helped create some separation from the Eagles.

Despite the Jaguars’ best efforts, the Eagles tied Spain Park again 21-21 and gained the lead back again. Trailing behind 30-27, one last dunk from Wright brought up the score 30-29 before the first half concluded.

At this point, it was too early to decipher which team would pick up this area win.

Coming back from the break, Spain Park fought to pick up the lead and carry it into the final quarter of the thrilling area matchup, however, Oak Mountain was relentless in keeping some separation between them and the Jaguars.

Spain Park had trailed Oak Mountain for the first time by more than two points going into the fourth quarter. The Eagles were up 53-25.

Williams posted 10 points for the Eagles in the third quarter with Heiberger following Williams with seven points.

Wright led Spain Park with 21 points from 10 field goals, while Gray added 11. James knocked down four points from the free-throw line and two points in the paint. Six different players scored for the Jaguars.

The fourth and final quarter secured the Eagles’ latest victory after they continued to increase their separation between themselves and the Jaguars even though Oak Mountain was mainly limited to the free-throw line.

Oak Mountain posted 10 out of their 14 free throw attempts in the fourth quarter and tacked on a single field goal from Laury.

This marked the first area loss for the Jaguars, leaving them now 3-1. The Eagles’ victory now makes them 2-2 in their area. Their next area games will determine who will host the area tournament for the 7A Area 6 region.

Spain Park returns home on Tuesday, Jan. 24 to host Chelsea in its next area matchup, while Oak Mountain travels to Hewitt-Trussville for another area game as well.