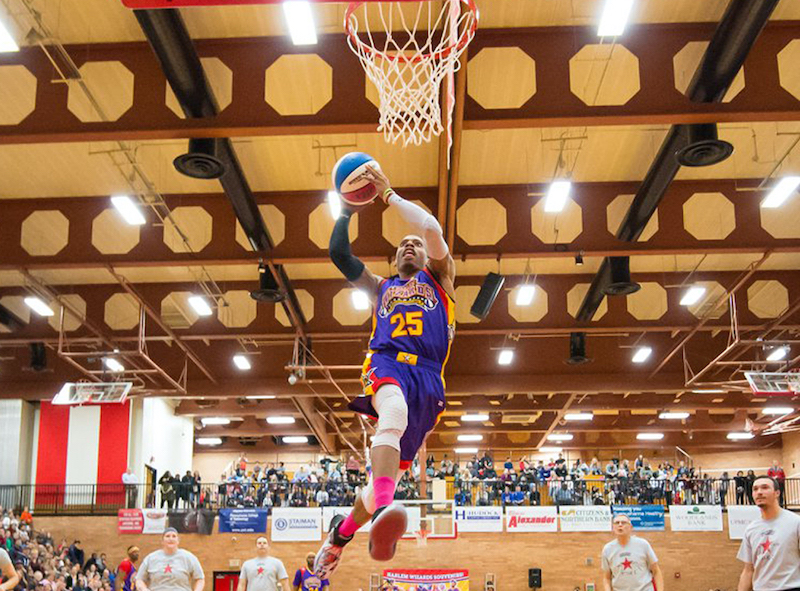 The Harlem Wizards will appear at Shelby County High on Monday, Feb. 6 at 7 p.m. for a high-flying basketball performance. (Contributed)

COLUMBIANA – Basketball fans can look forward to the arrival of the Harlem Wizards as the high-flying interactive basketball show sets a date to perform Shelby County High School.

The Harlem Wizards will perform at the Shelby County High School gym on Monday, Feb. 6 at 7 p.m. Doors will open at 6 p.m.

“The Harlem Wizards are the most interactive, fun, community basketball event in the world,” read a Harlem Wizards press release. “The energy at a Wizards game is electric. The laughter is infectious. The dunks are rim-rattling, high-flying and awe-inspiring. The hoop artistry, ball-handling, tricks and teamwork are mesmerizing.”

Courtside plus ticket holders will receive first row seating and meet privately with the Wizard players before the game for a meet-and-greet.

“The experience at a Wizards game is the community, the school coming together for a night of good, pure fun and excitement and it’s a fundraiser,” read the press release.

Founded in 1962, the Wizards have four teams that crisscross the country. During the 19-20 season, the Wizards will play more than 500 games in at least 35 states.

“I heard from the Columbiana Middle School PTO President, and I was impressed with the enthusiasm and confidence that this would be a hit in Columbiana,” said Todd Davis, Wizards president. “It was a little out of the way—as we have to go north, and we are zig zagging from the Atlanta area to you and back up to Pennsylvania at the end of the week, but I think it will be worth it for everyone, the host, the fans and the Wizards.”

The event will feature a variety of interactive extras to complement the Wizards demonstration of hoops artistry. Pregame will include a “Wiz Kids” warm-up, contests, comedy, slam dunks, audience participation, merchandise giveaways and more. The game will conclude with the Wizard’s signature dance celebration.

“We always want to assess if the event will be a hit for the host as we work with school groups and non-profits,” Davis said. “And I came away convinced, and Amy Dixon, the PTO President, did the rest and got the support she needed to pull this off.”

Leon “Space Jam” Sewell from Dothan, Alabama is on the squad coming for the event. Sewell has appeared on TNT on “Dunk Kings” and has a reputation for shattering backboards because of his dunks.

“He will do his best to avoid that happening on Feb. 6,” Sewell said.

Tickets for the Harlem Wizards game can be purchased at Harlemwizards.com.