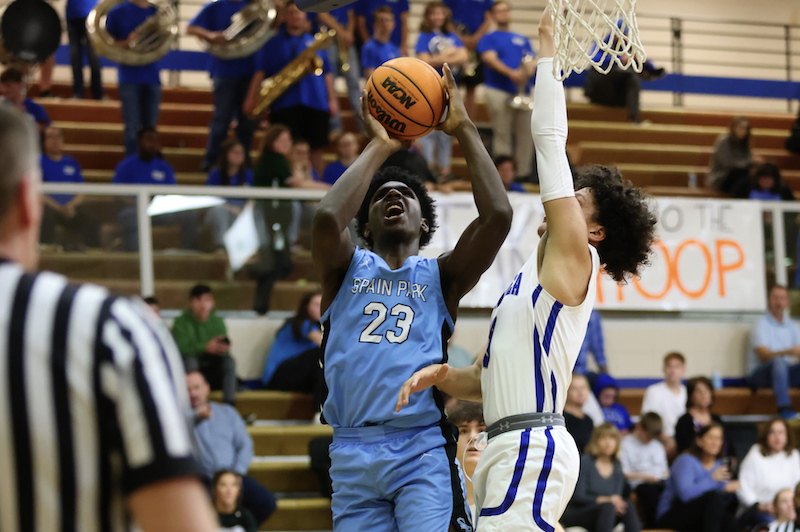 Spain Park picked up its fourth area win against Chelsea on Tuesday, Jan. 24. (For the reporter/Cari Dean)

HOOVER — Spain Park picked up a bounce-back area win against Chelsea during the Jaguars’ senior night. The Chelsea Hornets fell to the Jaguars 69-47 on Tuesday, Jan. 24.

In the opening quarter, the Jaguars posted two more points than the Hornets for a 13-11 lead. Chase James led Spain Park with two baskets posted outside the arc, while Chapman Blevins followed with one basket totaling three points.

The Jaguars created more separation after a strong offensive run before the first half concluded. Spain Park posted 22 points in the second quarter, while limiting the Hornets to five points from Paul Lanzi.

Sam Wright knocked down six out of the Jaguars’ 22 points. Hunter Herritt and Gray picked up three points each outside the arc. Jared Smith tacked on four points from two field goals.

James and Blevins added three points each from one free throw and a basket knocked down in the paint.

The Hornets trailed the Jaguars 35-16 at the half.

Returning from the break, Chelsea came close to doubling their first-half score during the third quarter. Futch and Lanzi totaled a combined 10 points out of the Hornets’ 14 before the final quarter.

Evan Houser and Long both made a basket outside the arc. T.J. Lamar, Blevins and Smith totaled a combined six points.

Despite Chelsea’s best effort in the final quarter, Spain Park’s successful offensive run in the second quarter picked up the Jaguars fourth area win of the season.

Both Spain Park and the Hornets topped off their final score with 17 additional points in the fourth quarter.

MJ Conrad led the Hornets in the final quarter with a single free throw and four points totaled from two field goals.

Futch and Lanzi both went two-for-two from the free throw line, while Lanzi added an additional two points from a basket in the paint.

Wright knocked down three free throws and a two-pointer for the Jaguars, while Herrit and James posted three points each outside the arc.