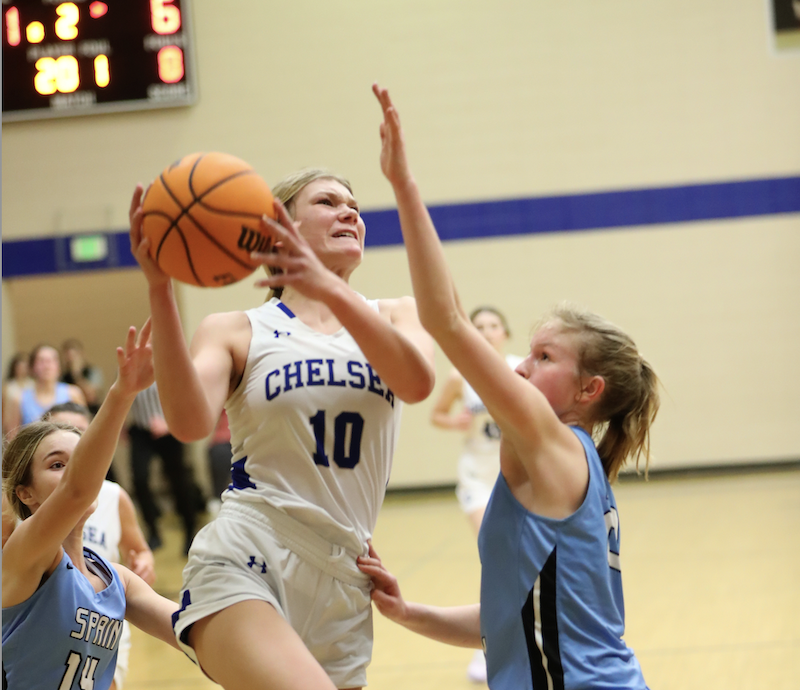 Spain Park girls fell to Chelsea at home on Tuesday, Jan. 24. (For the reporter/Cari Dean)

HOOVER  – Chelsea girls knocked down Spain Park for the second time this season in its recent area matchup on Tuesday, Jan. 24. The Jaguars after being limited by the Hornets’ defense to five or fewer points in each quarter.

Chelsea was a dominant offensive force from the start of the first quarter. Sadie Schwallie posted seven points out of Spain Park’s 15 in the opening quarter from three field goals.

Sophia Brown and Olivia Pryor went two-for-two from the free-throw line, while Pryor also tacked on an additional two points from a field goal. Madison Moore knocked down a basket in the paint.

The Hornets’ extended their lead by another 18 points before the first half concluded. Schawllie added another six points to the scoreboard from three field goals. Brown followed Schwallie with five points.

The Jaguars trailed the Hornets 33-8 before the half with Hunter posting the only three points Spain Park obtained in the second quarter.

Chelsea continued to apply pressure to Spain Park’s offense with the Jaguars only knocking down another two points from the free throw line. The Hornet picked up 18 points before the final quarter.

Sydney Carroll posted her first six points of the night for the Hornets in the third quarter, while Haley Trotter knocked down two baskets in the paint and one from the free-throw line.

Schwallie picked up one basket inside the arc and one outside the arc. Brown tacked on two points.

Spain Park struggled in the final quarter with Zyia Heyligar posting the Jaguars’ final two points of the night.

Chelsea concluded its victory with nine more points before the game concluded. Makenzie Fennel led the Hornets with a three-pointer in the final quarter.

This marked Chelsea’s third area win of the season. The Hornets are now 3-2 in their area, while the Jaguars are now 0-5.