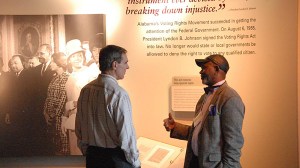 “Many people in the Deep South are not familiar with the Christian Church (Disciples of Christ). It is strong in the Pennsylvania, Kentucky and Upper ... Read more

First, some 25 years ago, came the Robert Fulghum bestseller “All I Really Need To Know I Learned in Kindergarten,” which has recently been released ... Read more

“Many people think a literary magazine is just binding a bunch of students' writing together, but it's much more than that,” said Eureka Editor Maddie ... Read more

Helena Parks & Recreation officially welcomed spring with their season opener in early March with all players and teams assembling for several hours that included ... Read more

Helena Beautification Board is again providing the much admired hanging baskets that adorn Old Town and extend further along Highway 261. Read more

Oh My Sole! is the newest business to open in Old Town and is the dreamchild of proprietor Lori Tatum. Read more

The eve of March 20 brought the long-awaited soft opening of The Coal Yard restaurant and bar and within the first hour, the main dining ... Read more

The Ivory Orchid opens in Helena

Students at Helena Elementary School sang a spirited "Happy Birthday to You" to Dr. Seuss, born 111 years ago, to kick off their March 2 ... Read more

On June 27, Emma Grace Hurt will be 9 years old. For her 8th birthday party, she and a group of friends enjoyed an outing ... Read more

To anyone visiting The Caboose in the summer months, it is obvious that central heating and air conditioning was not part of the plan for ... Read more

Jacob Rozycki, of Troop 2, was presented Eagle Scout at a Court of Honor on Feb. 8, with family, friends and fellow scouts in attendance. Read more