Back to the classroom in Pelham 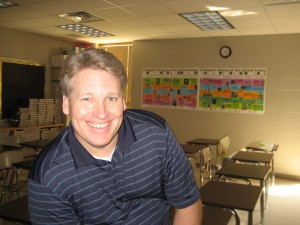 Jeff Schrupp, who served as an assistant principal at Pelham High School last year, returned to the classroom to teach history this year.

We’re headed back to school, and not even 100 degree heat can stifle the energy that pulsates through Pelham as we kick off our year.

More than 90 teachers welcomed almost 1,700 Pelham High School students this fall. We’re excited about the promise of a new year and sharing this school year with our students.

Jeff Schrupp joined the Pelham High faculty in 2006. He quickly earned a reputation as a demanding and amazing history teacher.

Last year, Schrupp moved into an assistant principal’s job at PHS. A master organizer, Schrupp accomplished many administrative goals. However, for the new school year, Schrupp has chosen to come back to the classroom.

“I missed teaching. I missed having my own students. I missed my subject matter,” said Schrupp. “Working with those in administration at this school and at the county was great, but I’ve learned something about myself. I have to be teaching.”

Finding Schrupp in his classroom, legs dangling over a desk as he synched his video with his electronic quiz questions, was enlightening. Schrupp the administrator was never as joyous as Schrupp the teacher.

Schrupp’s wife told me, “I’m glad he’s headed back to the classroom. He is happiest when he’s teaching.”

American teacher and poet Theodore Roethke said, “Teaching is what is left after all the reading and thinking and writing: the residue, the illumination.”

Illumination is the magic both students and teachers seek. Lights of new knowledge ignite an energy that fuels all of us — making the long hours of study, the grading and the planning so worthwhile.

Students appreciate those brave enough to join them in the trenches of learning when the battle gets tough. Most students have an amazing respect for their teachers’ efforts.

Schrupp knew he was headed back to the classroom shortly after our 2010 PHS graduates filed across the stage last May. Two of his former students went out of their way to find Schrupp and give him a simple gift — on their graduation night.

What those two boys actually gave Schrupp was a reminder of the impact he made as their teacher — and the little nudge he needed to land back in a classroom.

Parents and students gathered for a work day at Chelsea Middle School on the Saturday before the beginning of the... read more