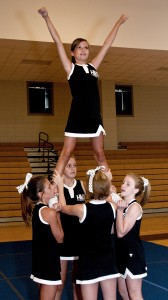 “Who are we, Helena? Say it again, Panthers!” shouted the Helena Middle School cheerleaders, crisp in black and white, as they led the newly oriented sixth-graders through a pep rally that climaxed the morning at Camp Panther.

“We had 252 sixth graders here,” said Scott McKnight, assistant principal. “The purpose of Camp Panther is to ease that transition from elementary to middle school. The sixth graders have the school all to themselves. We give them their lockers so that they can practice their combinations and talk about dress code. They had a great day.”

The enthusiastic sixth graders had their own thoughts on the magnitude of attending middle school.

“It means I’m closer to being grown up,” said Jonathan Watson as he folded his classroom schedule into an origami tent.

“And he is experiencing a year on his own apart from his sister, Hallie, who is a fifth grader at HIS,” Smith said.

“Sam was most dreading the dress code,” said mom Tracey Praytor. “But he is looking forward to changing classes and football and baseball next year, as well.”

Jared Cleghorn was pleased to learn where his classrooms are and relieved to find out that he can wear flip-flops. He looks forward to walking or riding his bicycle to school from Old Cahaba subdivision.

“He is not apprehensive,” said father, Jay Cleghorn, a computer programmer at HealthSouth. “His sister Carla just completed eighth grade and he knows some of the people here.”

Cleghorn was one of several fathers in attendance as Camp Panther dismissed, as in their case, mother Kim was also experiencing her first day at Homewood Day School, where she teaches pre-school.

Katherine Moore, after a trampoline accident this summer, was sporting a bright pink cast on her left leg and making the rounds in a wheelchair pushed by a helpful friend.

Sponsor and coach Michelle Saindon and cheerleaders Elizabeth Talley, Mandy Saville and Cassidy Cato encouraged the newcomers to prove their new school spirit and reminded those interested to consider trying out for the cheer squad or dance team.

Typing is the key to success

Peggy Kent, a University of Montevallo alumna, is a fixture in the office at Thompson High School and has witnessed... read more