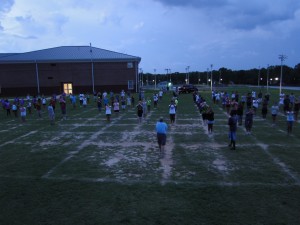 The Marching Eagles, under the direction of Ted Seabury, have consistently scored superior ratings and earned “Best in Class” awards at several competitions since he joined the school in 2001. This year will be no exception.

“I look forward to another good year,” Seabury said. “Our band consists of gifted musicians who work hard to make our community proud.”

Bailey Seabury led the percussion camp as they worked on stand tunes and field music. A team of Auburn students and alumni taught pep rally routines in a private camp held at the school for the auxiliaries.

Full band practice began July 26. Tunes from Queen were selected for field performances. Songs include: “Fat Bottomed Girls,” “Bohemian Rhapsody,” “Bicycle Race,” “Somebody to Love,” and “We Are The Champions.”

The band will wear new uniforms this year thanks to hard working parents, staff and community workers who raised funds over the past several years. The new, updated look of the band will be matched with great sound and clean marching.

“I’ve played flute for five years, but this is my first year as drum major. I can’t wait for our first performance!”

The majorettes, dance team and color guard have practiced alongside the band. Sponsor Dawn Bone, BTA instructor, has choreographed the halftime shows at CHS for nine years. To prepare for the upcoming marching season, several auxiliary alumni helped choreograph this year’s halftime show.

“I love every minute of it,” Bone said. “It’s exciting to watch them progress throughout the summer and their hard work is evident by the first field show.”

You can watch the Marching Eagles at any Calera football game. The first game is Aug. 27 at Montevallo. Competition season will start Oct. 2 at the Southeastern Marching Festival in Troy.