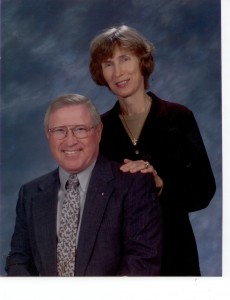 Ed and Wilma Simmons of Jemsion were married on Aug. 20, 1960 is Dallas. They met at East Texas Baptist College in Marshall, Tx. in 1959. During their 50 years of marriage, Ed served four years in the Air Force and retired from General Electric as a sales engineer after 40 years of faithful service. Wilma was, and still is, an industrious wife, mother and homemaker. Although they both grew up in Texas, they moved to Alabaster in 1979 when Ed was transferred with General Electric. They have lived in Jemison for the past 25 years.

Ed and Wilma are very active in their church, Mulberry Baptist, and the Hispanic Ministry in Chilton County, as well as in many volunteer services organizations including the Gideons and Gideons Auxiliary, Shelby Baptist Association and the Chilton County Master Gardeners. They have three children; Jeff Simmons of Dallas, Carol (Ken) Smith of Montevallo and Kathy (Jeff) Jones of Columbiana. They have six grandchildren: Rebecca and Karry Jones, and Alan, Amy, David and Lauren Smith.