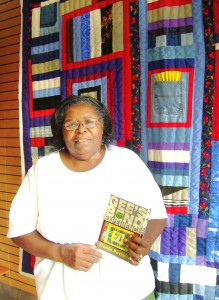 The very creative Tinnie Pettway of Gee’s Bend displays her quilts and a book of poems.

After 50 years, she and her sister Minnie make quilts the old way. I met Tinnie in Greystone at the store, That’s Sew Gee’s Bend.

“Every stitch is by hand,” she said.

The bright quilts hanging along store walls tell of busy hands, creative minds at work and survival. Tinnie’s fingers slid over the fabric, tracing fine stitches. She’d placed a denim pocket in the center of one.

“For the remote control,” she said, smiling.

Tinnie also writes poetry, and held up her first book for me to see. Its title is “Gee’s Bend Experience.”

She said, “My mama was always writing funny poems, wrote them down on a piece of cardboard. She would read them, making people laugh. I didn’t think her poems had a bearing on me, but one day I started writing. People laughed at my words, too.”

Flipping pages of her book, I found good advice for positive thinking, in a poem titled “Happy Biscuits.” It begins this way:

If you want your biscuits

To turn out good lookin’

Keep a smile on your face

All the while you’re cookin’

And now Tinnie Pettway has plans for “Gee’s Bend Experience” Volume Two, more poems. Author Irene Latham is writing the forward for this book. Latham has a book titled “Leaving Gee’s Bend,” a heart-touching novel based on the true story of a young girl living in this remote village. Keep tissue handy when you read this one.

A recent discovery of Gee’s Bend quilts by museum curators has gained them international acclaim. They’re now collectable art. An exhibition of Gee’s Bend quilts is currently at the Birmingham Public Library downtown and will remain through the first week of September.

Now you don’t have to drive to Gee’s Bend to buy the Pettway crafts or Tinnie’s book.

That’s Sew Gee’s Bend store is open in Greystone at 5492 U.S. 280, next to Cowboys. Also you can see its great website at GeesBend.net or call Tinnie Pettway’s daughter, Claudia Charley, at 408-2969 for information.

All sales proceeds from this independently-owned business, minus overhead expense, go directly to the Gee’s Bend residents who make these unique crafts.

Gladys Hodge Sherrer can be reached by e–mail at gsherrer07@yahoo.com.