Brooks a passionate advocate for kids 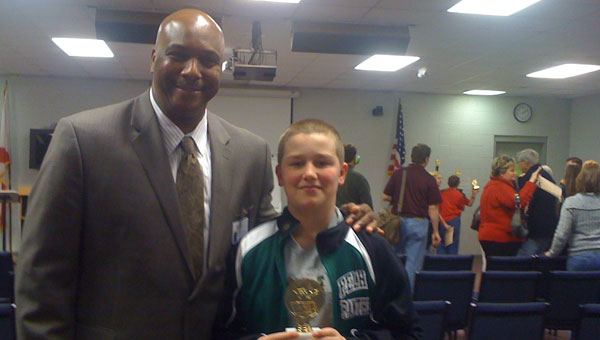 When Lewis Brooks returned to Shelby County to serve as middle school coordinator of instruction, my youngest child was approaching middle school.

Our families first became acquainted at the ballpark. When Brooks came to Pelham High to serve as our assistant principal, I knew we were fortunate.

Watching Brooks parent his own children and help with coaching at the park revealed the passion he had for empowering kids to appreciate their starring roles in their own lives. Brooks holds kids accountable for their choices, helping them to see how those choices impact their lives.

When my youngest detailed her experience on the Choice Bus that has been visiting Shelby County sixth-graders, she echoed the warnings Mr. Brooks issued aboard the bus. Whether it’s his impressive stature or impressive sincerity, Brooks makes middle schoolers believers.

The Choice Bus is half school bus and half jail cell. Designed to show kids that choosing to stay in school is choosing to stay out of jail, the realistic jail cell, its public toilet and cramped accommodations drive the message home.

Businessman Shelley Stewart first partnered with Shelby County Schools to implement the Choice Bus. Choosing to transcend his own difficult past, Stewart wants to clearly show kids that no matter where they come from, their own choices determine where they’re going.

“After Stewart unveiled the Choice Bus idea, Larry Headrick and Donna Dickson asked if Shelby County Schools could partner with his foundation. Our system donated the bus — and the rest is history,” Brooks said.

Today, the Choice Bus visits middle schools nationwide reminding students that they choose their own stories.

Brooks is excited about everything middle school in Shelby County, including Project American Life, a civics and character development camp for middle school students.

“Starting my career as a middle school teacher at an alternative school, I realized kids need more than subject matter. These kids need someone to care about them,” Brooks said.

Brooks a passionate advocate for kids

When Lewis Brooks returned to Shelby County to serve as middle school coordinator of instruction, my youngest child was approaching... read more