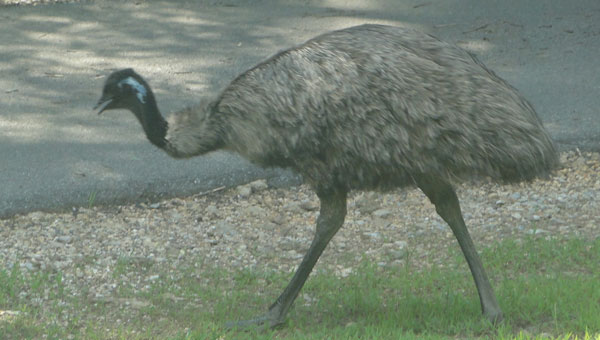 Mu-Mu the emu before capture.

My Labor Day weekend plans were to kick back, enjoy our pool before closing it and not lift even my pinky finger.

One thing about plans: they change.

The prior Thursday, sitting in my home office, I glanced out the window. A huge bird was strolling through my yard. I grabbed my camera and took pictures through the window until it was out of sight. I emailed them to a friend, who helped determine it was an emu.

What is an emu doing in my yard? My friend guessed he jumped the fence. I can understand that. I want to jump the fence sometimes. Anyone raising teenagers will agree.

Flash forward to early Saturday morning. My visitor returned, undaunted by barking dogs. I bravely walked toward him, but he turned and walked away. I went inside and called Connie Payton, Calera city clerk, confident she would know who raises emus. Like her mother-in-law, Lemoyne Glasgow, who served as city clerk for many years, she has a wealth of knowledge. She gave me the owner’s name and wise counsel — stay out of spittin’ distance.

David Comer raises emus. I called his mother, Janice, to ask if David was missing an emu. Yes, and she would call him. In the meantime, I racked my brain for something to lure him to stay in the yard. I decided rice cakes — don’t ask me why.

The emu was not interested in rice cakes, but did find the aberrant woman quite amusing. I whistled, attempted a peacock cry (again, don’t ask) and babbled on and on to keep his attention.

“Come here Mu-Mu,” I called. He actually liked his name and responded. I ran.

Jeff Foxworthy came to mind — you just might be a redneck if you’re in your front yard, wearing pajamas, you have a tete-a-tete with an emu and allure him with rice cakes.

The cavalry — Comer and my husband, Donnie — arrived just as Mu-Mu became bored with my antics. Watching them attempt to catch him, I realized keeping the emu in the yard was easy. Thinking I could help with what worked earlier — beguiling babble — produced the “I don’t need your help” look from my husband.

Mu-Mu did not go down without a fight. Both men suffered battle wounds before immobilizing him.

Before loading Mu-Mu, I insisted on pictures. This was a Labor Day weekend not to be forgotten.