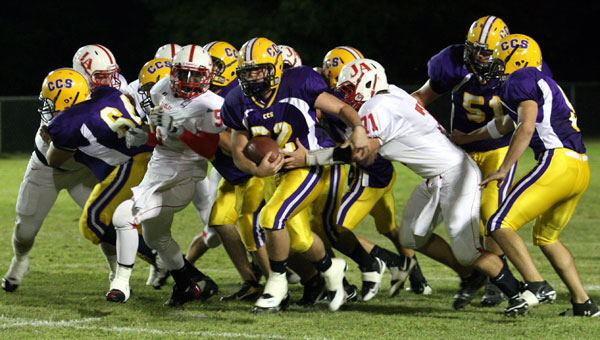 Cornerstone Christian School running back Clayton Halbert breaks away from a group of Jackson Academy defenders in the Chargers' loss Oct. 1. (Contributed/Cindy Wingard)

The Chargers got off to a bad start, as Jackson Academy partially blocked a punt on Cornerstone’s opening possession.  The Eagles punched it in five plays later to take an early 7-0 lead.

Jackson got back on the scoreboard on their next possession with a 5-yard quarterback run to put the Eagles up 14-0 at the end of the first quarter.

The second quarter was not much kinder to the Chargers, as they finished the first half with only 69 yards of offense.

Jackson took a 28-0 lead less than one minute into the third quarter before the Chargers would get things going.

Cornerstone cracked the scoreboard on a 10-play drive that covered 55 yards. Clayton Halbert scored from 1 yard out and Eric Braun added the extra point to cut the lead to 28-7.

Chase Crumpton intercepted a Jackson pass to put the Chargers back in business in a hurry.

Josh Anderson scored on a 67-yard reverse and Braun’s extra point cut the lead to 28-14 with five minutes remaining in the third quarter.

Jackson got all momentum back as it scored on a 57-yard run on the first play after the kickoff to extend its lead.

Crumpton would once again help Cornerstone get the ball back as he recovered a Jackson fumble. Anderson scored his second touchdown on the night as he went in from 22 yards out on the last play of the game.

Even though the Chargers came up short on the scoreboard, Cornerstone coach Tim Smith was proud of his team.

“This is the best team we have played all year,” Smith said.  “We are young and have gotten better. We just have to keep working and get ready for next Friday night.”

Anderson led the Chargers on the night with 204 yards rushing and two touchdowns. Anderson added 66 return yards and five tackles. Halbert added 70 yards and a touchdown to go along with his nine tackles.

The loss drops the Chargers to 2-4 overall and 0-3 in AISA Class 1A, Region 1.  Cornerstone travels to Meadowview Christian in its next game Oct. 8.