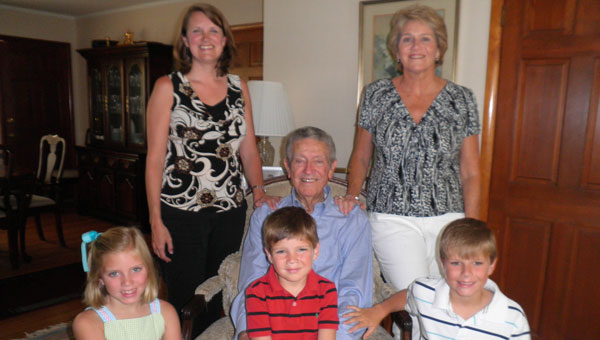 The second oldest of 10 siblings, Elvin Hill was the first in his family to graduate from college, Alabama Polytechnic Institute, now known as Auburn University.

When asked why he chose Auburn, “Was there another college?” he said.

Hill’s legacy of education became reality with that far-reaching statement. After graduation, he became a teacher at Shelby County High School on January 1, 1942, in his major, vocational agriculture.

When asked why he chose to teach this subject, “It was what I knew, and what I knew would teach real jobs for the real world,” Hill said.

Hill met Columbiana native Wylodine White soon after his move to Columbiana. They married in August 1943 and had four children: Nancy, Peg, Mike and Jeff.

Wylodine graduated from college after the birth of their children and became a business teacher at SCHS.

Hill taught for four years at SCHS under Principal Woodrow Elliott, who became Hill’s mentor and friend. Elliott’s influence on Hill’s life was huge. “He was a great man,” said Hill.

After Elliott was elected superintendent of the Shelby County Board of Education, he chose Hill to become his successor as principal of SCHS.

Hill led SCHS for 12 years until Elliott encouraged Hill to run for superintendent. Hill ran, won his first election, and became the leader of Shelby County Schools for 21 years.

During Hill’s leadership, Shelby County was exploding in growth. Hill oversaw the construction of many new buildings: Pelham High School, the first school to have air conditioning in Shelby County; Valleydale Elementary; five gymnasiums; and the School of Technology.

“The School of Technology is my greatest pride and joy,” Hill said.

Hill retired after 12 years because of health issues. At his retirement dinner, Hill learned that Columbiana’s new elementary school was to be called Elvin Hill Elementary, a tribute to the man who had done so much for education in Shelby County.

Hill’s legacy has continued through his family. Daughters Nan and Peg taught at Columbiana schools and Peg later became principal of the school named for her father.

Peg currently serves on the Shelby County Board of Education.

Daughter-in-law Carol retired from teaching at Columbiana Middle and SCHS.