With Holland’s attitude, anything is possible 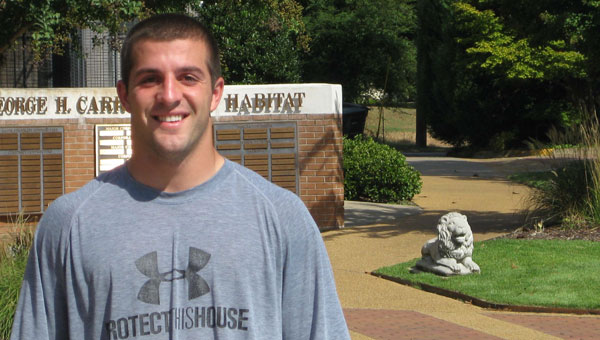 Pelham’s Wes Holland on the campus of the University of North Alabama.

Traveling to Florence for my son’s golf tournament allowed me to visit my alma mater, the University of North Alabama.

The fact that UNA’s current football coach is former Auburn coach Terry Bowden, paired with a championship 2009 season and an undefeated 2010 season, is keeping UNA in the news.

My husband, who serves as my in-house sports reporter, follows the UNA Lions — especially since Wes Holland (PHS class of 2007) joined the team.

In fact, my husband saw Holland score when he caught a glimpse of a UNA game.

UNA keeps an actual lion on campus. Leo the Lion was the school’s only mascot when I was an undergrad there.

His habitat sits right beside the English building where I received my poetry, literature and writing classes against a backdrop of lion roars.

Leo has a new lion habitat now and he is joined by a companion, a female lion named Una.

My youngest daughter hoped to catch a glimpse of the lions. While the Nolen men made their way to the golf course, Faith and I met Wes Holland at the Lion Habitat at UNA.

When Holland was my student at PHS, he possessed the trademark trait of successful students — teachability.

Holland believed that his coaches, his teachers and his fellow students had something to teach him.

Holland’s humble, “I’ve got a lot to learn” attitude, has carried him far.

Following the weekend’s 31-0 shutout against Lambuth College, Holland was content. When asked if he had a good game, Holland said, “I did OK.” In fact, he rushed for 79 yards, but he didn’t tell us that.

What Holland did tell us is how much he loves UNA. Looking forward to taking one more English class to satisfy his course requirements, Holland said, “PHS really prepared me for college writing.

“I was more than prepared for all of my college classes — absolutely prepared.”

He said, “I would love to go to medical school at UAB or South Alabama.

“I would love to be close to home.” He laughed, “Honestly, I’ll go anywhere they’ll take me, Mrs. Nolen.”

Asking Holland if he planned to pursue football after college, he gave me my favorite answer of the afternoon.

For Wes Holland, possessor of an open mind and an ongoing education, anything truly is possible.