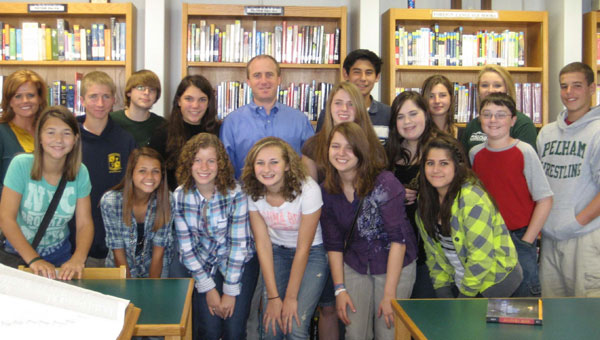 When PHS English teacher Rebecca Burnett read Watt Key’s first book, “Alabama Moon,” her son was 10 — just like Moon, the novel’s main character. Moon has lived his entire life in the Alabama woods. Burnett’s fascination with Moon led her to invite author Watt Key to come to Pelham to speak.

Key said yes. Burnett traveled faster than her e-mail to my classroom to share the good news. At the time, she had just taken on the role of PHS Battle of the Books coach and started our first book club that chooses books to read and then meets throughout the school year to discuss these reads.

I have known many book lovers in my day, but Burnett’s excitement about books is beyond appreciative. She doesn’t simply love books. She campaigns for books, enlists everyone to read and discuss books with her — and sometimes she e-mails authors. Most importantly, she ignites the reading and writing passions of her students.

Key’s first visit to PHS in 2008 was a huge hit. Revealing to our students that a Birmingham Southern college class landed him in the Alabama woods one January trying to survive on only what he could find, Key confessed that he ate dinners of snake meat, which flinched when he bit into it, along with other animals that most would never eat.

On his return to PHS on October 1, Key discussed his new book, “Dirt Road Home,” a companion novel to “Alabama Moon” that follows one of the original characters who has to spend time in a juvenile detention facility. Dealing with gangs, peer pressure, corruption and bullies, the book has captivated our students like a newspaper headline.

After presentations in the auditorium, Key met with a small group of students in the PHS library. Enjoying a snack with the students he answered their questions — about his writing and theirs.

“When I speak to adults, I am entertaining; but when I speak with students, I feel like I’m helping. I encourage students to trust their instincts and be optimistic,” Key said.

Key’s optimism has certainly reaped dividends. This winter, the feature film of “Alabama Moon” hits theaters. As for Burnett, her students are reading Harper Lee’s “To Kill a Mockingbird.” To celebrate its 50th year in print, they invite the Pelham-Helena area to participate in a community-wide reading of Lee’s book.

With Holland’s attitude, anything is possible

Pelham’s Wes Holland on the campus of the University of North Alabama. Traveling to Florence for my son’s golf tournament... read more