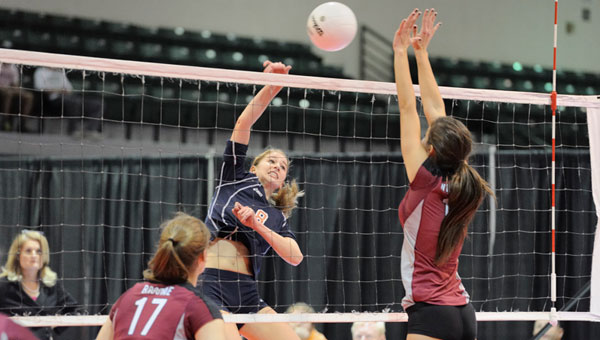 There was one huge difference the quartet felt divided the Eagles and their opponent, Huntsville, in the Alabama High School Athletic Association Class 6A championship match Oct. 28 at the Pelham Civic Complex.

Oak Mountain players lacked experience in a championship match setting. Huntsville, which won its eighth Class 6A title in the past nine years following a 25-13, 25-19, 21-25, 25-22 win over the Eagles, featured a roster with plenty of experience playing in front of big crowds at the Pelham Civic Complex.

“I don’t think any of us were intimidated by Huntsville,” Skinner said. “But it’s our first round in the finals. We were ready to play, but I don’t think we were ready for the atmosphere. I think (Huntsville players) were ready.”

Skinner led the Eagles (57-19) with 22 kills in her final match, including eight kills in each in the final two games of the championship match. The University of Alabama volleyball commitment added 12 digs, three blocks and a service ace.

Payne, a senior setter, recorded a team-high 32 assists to go along with six digs, a kill and a service ace.

Skinner and Payne were each named to the AHSAA Class 6A All-Tournament team.

Oak Mountain struggled in the first two games of its third state championship match in school history, as the Eagles fell behind 3-0 in the opening game and faced a 5-0 deficit to start the second game.

Oak Mountain jumped out to a 6-1 lead following two service aces by Goodwin early in the fourth game, but the Eagles fell victim to an 8-0 run by Huntsville in the game and couldn’t regain the lead.

Skinner said the Eagles had trouble playing with a lead against the Panthers.

Richardson, who led Oak Mountain to its first Class 6A championship match since 2002 in only her second season as the Eagles’ head coach, said her team felt confident it could win a state championship following the regular season.

“It was real familiar to (Huntsville),” Richardson said. “Kind of old hat, so to speak. They had an edge on mental preparedness.”

Despite the loss, Richardson said the Eagles can be proud of leading the Oak Mountain program back to a state championship match. Richardson, who led Pelham to two state titles before taking the Oak Mountain head coaching position, said there isn’t much difference between first and second when looking in the rear-view mirror.

“Second place is no fun,” Richardson said, “but I’ve got to be honest. Finishing runner-up was just as significant as winning it when I look back.”

The Briarwood Lions, who are headed to the state championship on Thursday, celebrate their semifinal victory on Wednesday night. (Reporter... read more