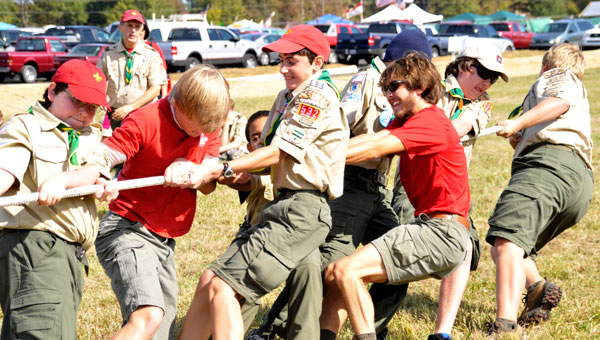 Helena Boy Scout Troop 532 was one of 18 local troops participating in the 2010 Shelby Camperoo held this year at American Village.

Troop 532, with members ages 11 to 17, arrived Friday evening to set up tents and camp in the field that fronts Shelby County 177.

They awoke to a view of the pristine buildings and picket fences of American Village aglow in the early morning sunlight.

A chilly first night found Patrick Kennedy grateful to have been reminded by his mother to take his sleeping bag.

Scoutmaster Louis Vildibill said, “Our boys have a lot of heart, and the highlight for them was placing first in the cumulative score for the tug-of-war contest. They were very determined, although competing against older and bigger boys.”

The tug-of-war was one of four competitions through which each troop rotated over Saturday. Other events included building a catapult to shoot tennis balls toward a target and a Morse code and semaphore contest. The catapult challenge required their use of knowledge of knots and lashing to hold together a structure assembled from miscellaneous wood materials.

A scavenger hunt that ranged over the grounds gave the Scouts an opportunity to sharpen their observations about details of America’s history and freedom and the ideals of liberty as they visited Mt. Vernon, the Colonial Chapel, the Liberty Bell and other American Village structures and monuments.

Meals were cooked and eaten on-site near the tents and Vildibill noted that Troop 532 enjoyed a hearty breakfast of pancakes, sausage, cinnamon rolls, milk and juice to prep them for their intensive day.

“We also hosted the Webelo dens that are getting ready to move up,” Vildibill said, “And I think we really stepped up our impression on them with our evening meal desserts—a choice of three cobblers: peach, chocolate delight and pineapple.”

Each troop was also scored on campsite inspection, as well as graded for being on-time throughout the scheduled day.

Troop 532 received a perfect score at camp inspection and placed third overall for the day.

They also tied for first place in the scavenger hunt, coming in second after the tiebreak.

“Our afternoon tug-of-war super team was powered by Trey Berryhill, who is on the PHS wrestling team, and Andy Vildibill, who has been newly nicknamed ‘Tank.’”

Each troop was also scored on campsite inspection, as well as graded for being on-time throughout the scheduled day.