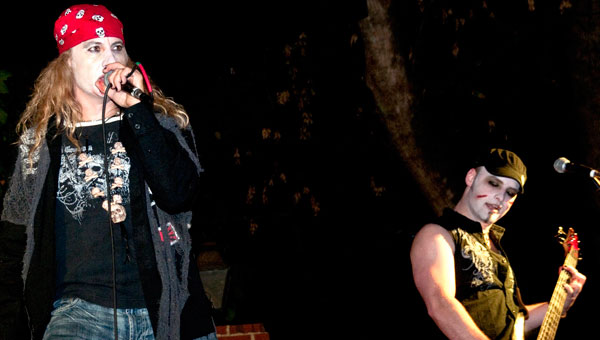 The band U.S. performed at the 2010 Jammin’ at the Junction. (L-R) Kelly Nagy, lead vocals and guitar, and Joey Vendetta, bass guitar and vocals.

When Jammin’ at the Junction premiered in 2009, it was planned by Bo Bice, in honor of the late Larry Childers, his mentor and friend.

With advance plans to schedule this year’s event on Oct. 30, an open date in Bice’s schedule, the best-laid plans of mice and men (and ghosts and ghouls) required adaptation when Bice found himself double-booked and mandated to be at The Rocktober Fest at the Lonestar Speedway in Kilgore, Texas.

Carrying on with plans for afternoon trunk or treat fun for the kiddies, plus inflatables nearby to work off that sugar overload, preceded an evening of music with the Alexa Rankin Band, Rock Candy and another band, U.S., whose lead singer and guitarist is resident Kelly Nagy.

Joy Childers and family will again donate funds to benefit charities dear to Larry Childers’ heart — the Helena Police and Fire Explorers and Safehouse. An anticipated addition next year will be a College Scholarship Fund to be awarded to a PHS student.

“We had to take a turn,” said Childers. “Let’s say we are parlaying it into a turn for the better, as next year this event will be scheduled a bit earlier and be built around a fall festival theme. Helena has never had a fall festival, although we have a big event for the other three seasons.”

Among the “treaters” were the Helena Kiwanis, North Shelby Relay for Life, Aaron’s Staff Ministry, Country Boyz Heating/Cooling & Refrigeration, whose boot-trunk just happened to be that of an antique 1931 Model A Ford.

Boy Scouts were selling barbecue and City Café manned the concession booth as well as sending costumed waitresses throughout the crowd with specialty samples.

Wolfe Orthodontics sponsored a Candy Buy Back for children wishing to exchange their treats for prizes. Collected candy will be donated to local shelters and Children’s Hospital.

A special bench honoring Larry Childers is currently in residence at City Hall, waiting for permanent placement. Possibly, though, it is already in its permanent location, as Amphitheater Park has been experiencing vandalism. Picnic tables chained in place were cut loose and taken recently, so the original, idea to place Childers custom bench there is now being rethought.

“Many of Larry’s old friends from the Planning and Zoning committee — Billy Harris, Jack Gray, Bob Caliento and Jackson Knox — have come by to sit on it and reminisce about Larry,” Joy Childers said. “He would love knowing that.”

Helena Boy Scout Troop 532 was one of 18 local troops participating in the 2010 Shelby Camperoo held this year... read more