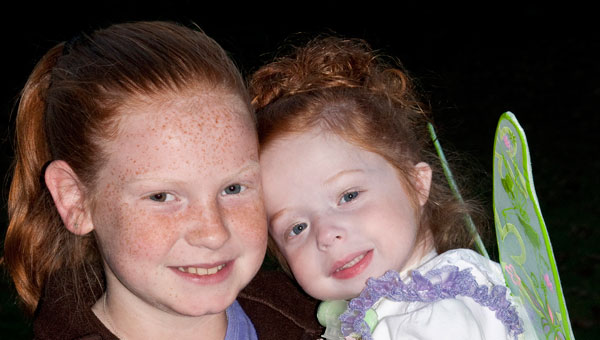 On Halloween eve at Helena’s Trunk or Treat, the fairy sprite of Ashleigh Otis, now four years old, is held by her sister, Emily.

While expecting the birth of their second daughter, Jason and Michelle Otis had no idea their baby girl, Ashleigh, coming into the world to join sister, Emily, six-year-old, would be anything other than normal.

Ashleigh, at 5 ponds 6 ounces, spent one hour in the well-baby nursery in Montgomery before breathing problems were observed and doctors began to run diagnostic tests and x-rays to pinpoint the problem.

The initial diagnosis was a narrow nasal passage. Michelle and Jason were accommodated in Rooming In, to learn to use the oxygenator machine on which Ashleigh was placed.

On Day three, Ashleigh took a sudden turn for the worse and was transferred to Children’s Hospital and kept immobile and intubated. Doctors found that the upper left lobe of her lung was pushing (like a balloon) on her heart and emergency surgery was scheduled on the July 4 weekend to remove the lung; as it turned out, only half was removed.

With the real problem still undiagnosed, the family was told Ashleigh might not make it through the night.

Several blood transfusions were required and the pulmonologist stayed with Ashleigh all night tweaking the ventilator.

“At this point,” said James Otis, “our whole world became just trying to keep her alive. We told the doctors, ‘We want to learn, too, and work with you as a team.’ ”

Ashleigh was kept sedated until a second lung surgery was performed on July 28, and the Otis’ were told, “There is nothing more we know to do.”

“We didn’t lose hope,” Jason and Michelle said “But there wasn’t a lot to hold on to.”

Through the next few hours Ashleigh retained too much oxygen and was being X-rayed every hour by a resident named Thomas.

The same resident brought them the news: “She made it! She’s doing absolutely wonderful!”

Ashleigh had to be weaned from all the drugs (including morphine) in her system.

Her tiny body was so sensitive that just a touch would send her heart rate shooting up more than 200 beats per minute.

Early in their stay at Children’s Hospital, the family was under the care of night nurse and Helena resident James Vines. Vines remembers, “She was such a tiny thing, but red-headed and had a temper. There was a vein in her forehead that would throb and I knew that was a sign to go slow.”

Possibly the strength of her temper helped Ashleigh survive and today, with a tracheotomy and a G-tube through which she is fed a special formula, Ashleigh is home schooled.

The Otis family has moved to Helena to be closer to Children’s Hospital.

Jason Otis began to keep a journal of Ashleigh’s journey in July 2006. Readers can learn more details and follow it at: Ashleighotis.net. The photo gallery is not to be missed.

The band U.S. performed at the 2010 Jammin’ at the Junction. (L-R) Kelly Nagy, lead vocals and guitar, and Joey... read more