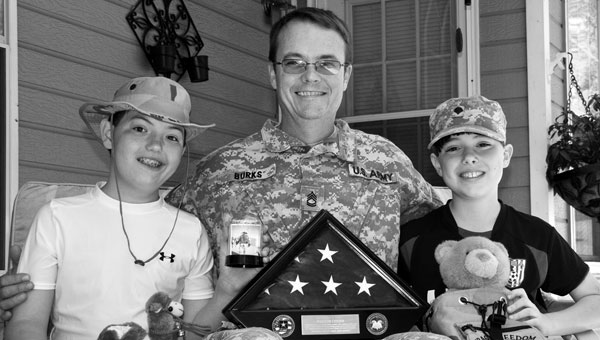 When Gov. Bob Riley honored members of the 75th and 87th Army Reserves earlier this year, Helena’s SFC Wendal Burks was among those presented with a coin/medal engraved with the Great Seal of Alabama.

Burks received a call from Donnie Penhale just before Christmas 2004, informing him of his duty. He departed Jan. 5, 2005, with his new unit. At that time, the army implemented cross-leveling — meaning units were re-formed from reservists from 47 states.

Burks joined the Army Reserve during college on the advice of a professor, who advised him he would enjoy the adventure. He was previously stationed in Panama and Germany, but he says that was like playing Army compared to his tour in Iraq.

As part of a Transportation Unit, he was responsible for hauling fuel and supplies.

“We were armed from the waist up, flight vest, M16, helmet, in temperatures 120 degrees and traveled thousands of miles, most of it at night. Our unit came home with everyone alive; only one person was injured seriously, losing a leg.”

Burks is also grateful to have endured only one of the country’s notorious sandstorms.

“That sand is so fine and thin, you can’t keep it out of any building or body part. Your mouth, eyes, your lungs — during the storm visibility is only 10-12 feet.”

“We didn’t know it until the end, when someone pulled down the cardboard covering it, but there was a picture of Saddam puffing on a big cigar right by the door.”

Burks and wife, LaDonna, have two sons, Preston and Spencer, 12 and 10.

“Military families cope in different ways,” LaDonna Burks said. “With our boys then so young, it was very comforting for them to receive packages from their dad.”

The boys each have hats with embroidered patches, knapsacks, uniforms and a special now-well-worn teddy bear.

“Our neighbor made them each a pillowcase with their dad’s photo in uniform on it and we didn’t go anywhere without our pillows and teddy bear.”

“Mayor Penhale came by and checked on us, which meant a lot, as we don’t have relatives close by.”

Their Jackson Square neighbors welcomed Burks home with a celebration at the flag-festooned neighborhood gazebo upon his return.