Keeping kids on the courts 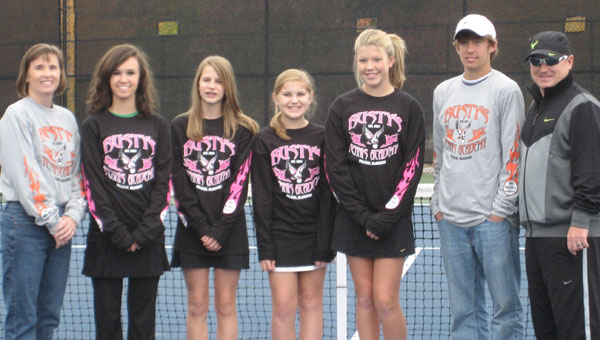 Rusty Wilkes and the other Pelham Racquet Club tennis pros who work with junior players think creatively to keep kids on the tennis courts year-round.

When summer tennis concludes, the pros begin fall clinics and take advantage of school holidays to get kids on the courts as well.

On Veteran’s Day and on the day before Thanksgiving, the club hosted daytime clinics for junior players.

And on the one November Saturday that neither the Auburn nor Alabama team played football, these Pelham pros had their tennis players making great use of the weekend by hitting their home courts for tournament play.

Fifty-three players between the ages of 8 and 18 participated. “We started on Friday afternoon and tried to finish up by Saturday afternoon,” Wilkes said. “Since both Alabama and Auburn’s football teams weren’t playing, we had many players ready to play.”

In addition to striking the perfect weekend without major college football play in the state, the event also enjoyed great fall weather.

Players representing tennis clubs from all over the Birmingham area participated in the tournament.

“Since this was an unsanctioned tournament, the players competed in eight game pro-sets. Pro-sets are like school tennis.

Our middle and high school team players are familiar with that format,” Wilkes said. “Playing pro-sets allows more matches to be played, affording players the challenge of facing more opponents.”

Pelham Racquet Club junior players did well in the tournament.

In the girls’ play, the students of Pelham Racquet Club tennis pros had either winners or finalists in every age bracket.

Players received a tournament T-shirt, and Johnny Ray’s in Pelham catered a BBQ lunch for players and their families.

On Saturday, junior players got a glimpse of college tennis since the PRC was also hosting a UAB Pro-Am Tourney allowing PRC adult members to play with the UAB college tennis team.

“These are both great events,” Pelham Parks and Recreation Director Billy Crandall said. “We’re fortunate to have a facility where two tennis tournaments can take place on a gorgeous fall weekend.”

Community columnist Connie Nolen can be reached by e–mail at CNolen@Shelbyed.k12.al.us.

When in doubt, try, try again

(L-R) Junior Catherine Schmidt and seniors Sam Ellis and Anna Smith were the girls of summer who resized and corrected... read more