Writing for a Claus cause 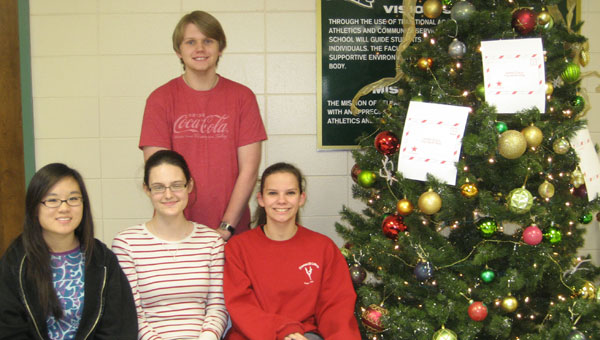 Pelham High School students (L-R) Jennifer Chang, Catherine Schmidt, Seth Landsdowne and Sarah Banasiewicz are planning to build and install a red mailbox at the school to collect letters to donate to a Macy’s Christmas fundraiser.

Most Decembers, my students study Francis Church’s famous response to 8-year-old Virginia O’Hanlon’s letter to the New York Sun. Written in 1897, Church’s reply, “Yes Virginia, there is a Santa Claus,” is among the world’s most famous essays.

Macy’s Department Store uses “Yes Virginia, there is a Santa Claus,” to promote its fund-raising drive for the Make-a-Wish Foundation, which grants wishes to children battling life-threatening illnesses. For every letter to Santa that Macy’s receives in their stores’ big red mailboxes, they contribute one dollar to the Make-A-Wish foundation, up to $1 million.

The feature culminates with Virginia’s breathless buddy appearing on the doorstep carrying the New York Sun proclaiming, “Virginia, your letter! They published it.”

Working with students who believe in the life-changing power of words, I’ve challenged my classes to use their writing to make the wishes of struggling kids come true by writing their own letters to Santa.

No material items may be requested in my students’ letters and their letters reveal their generous spirits. My students’ excitement about this project is delightful. Everardo insisted we needed our own red mailbox. Seth volunteered to build the mailbox. Younger siblings are writing letters. One student has enlisted letters from a Brownie Troop. Sarah is asking her dance studio to write Santa letters. Catherine’s mom will send letters from her first-grade class.

Church’s words are magical indeed. He writes, “Yes Virginia, there is a Santa Claus. He exists just as certainly as love and generosity and devotion exist.” These qualities abound at PHS, where we see great evidence of Santa daily.

If you’d like to read Virginia’s letter and Church’s “Yes, Virginia, There is a Santa Claus,” or know more about Macy’s partnership with the Make-A-Wish Foundation, visit Macy’s Believe website at Social.macys.com/believe2010/#/home.

If you’d like to join PHS and use your writing talents for a Claus cause, write your letter, attach a first class stamp and leave it in the big red mailbox at Macy’s or at PHS.