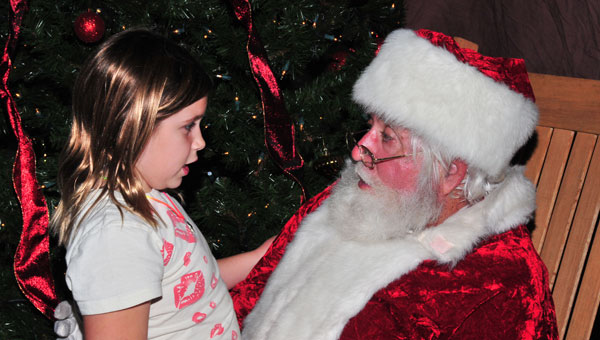 Santa shows up in Pelham with alarming regularity during the holiday season, and hopefully, these frequent Santa sightings keep all of us on our best behavior. Last Friday, Santa arrived at the YMCA in Pelham to share cookies, cocoa and conversation with an excited group of kids.

With loud laughter and bell-ringing, Santa stopped both exercisers and children in their tracks.

“The kids crowded around Santa in stunned silence,” YMCA employee Allison Moore said. “When Santa made it to his chair in the kids’ gym, they all fell into line anxiously awaiting their turns with Santa.”

David Mitchell, who usually opens up the Y in the early morning, came out to photograph Santa. Mitchell said, “The kids rushed Santa at the door when he arrived. Their reactions were great.”

Even YMCA employees were excited to get photos with Santa, including Childwatch Coordinator Kristy Trammell. Werner said, “Kristy Trammell put the whole event together.”

Everyone left the YMCA Friday night determined to stay on the nice list. In these last days before Christmas, Santa may show up at the Pelham Public Library and the Pelham Senior Citizens’ Christmas luncheon also.

Santa makes his final rounds through Pelham on the fire truck on Christmas Eve before heading back to the North Pole just in time to begin his annual world tour. In all the Christmas craziness, I struggle to focus on what’s really important.

Bell-ringing at the Salvation Army Kettle, my husband was approached by a little girl who had saved her change all year in a sandwich bag.

She wanted to give to the Salvation Army and she was so joyous over making her gift that she could hardly wait to put her mother’s change in the kettle as they left the store.

That’s one little girl who is sure to make the nice list! As we all work on pleasing Santa in these last days before Christmas, may we allow the season’s magic to move us to joyous gifts of unselfishness, inspired by the original Christmas gift God gave us all – and sweet little girls saving their pennies in sandwich bags.

Writing for a Claus cause