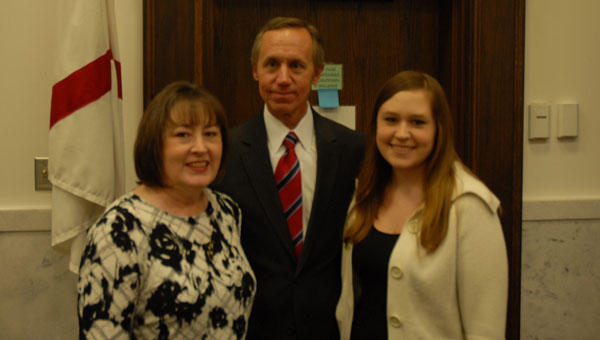 Judge Michael Joiner (Center) pauses to pose for a photo with wife Cathy (Left) and daughter Christy during a celebration in his honor Feb. 25 at the Shelby County Courthouse. (Reporter Photo/Brad Gaskins)

Shelby County is well represented these days in state government.

Not only is the governor a native of Shelby County, but so is the Medicaid director, Dr. Bob Mullins. The two were childhood friends and chose the medical profession in which to live out their lives. Now both find themselves in challenging positions being reemployed after only short stints of retirement.

The Medicaid department is one of the toughest challenges in state government, but Gov. Bentley put someone there who he not only knows and trusts, but who knows the Medicaid system from his years of professional medical experience.

Another Shelby County native, Major General Perry Smith, was appointed by Gov. Bentley to serve as Adjutant General of the National Guard. Shelby County has its share of enthusiastic members and supporters of the Guard. It also has the gentleman who heads it up, manages its daily duties and is prepared for whatever comes its way.

Another Shelby County native, of course, is recently appointed Appellate Court Judge Mike Joiner. He graduated from Indian Springs and served almost two decades on the Circuit Court bench here. Not only is he on the Appellate Court, but is sure to work his way up to the Supreme Court in the near future, as well.

In addition to the four leading men from Shelby County, there are two women serving. One of those women is Irene Collins, reappointed by Gov. Bentley to serve as the director of Senior Services. Collins lives in Columbiana and has served in that capacity for the past eight years under Gov. Bob Riley. She is no stranger to the field in which she serves, and has done an admirable job there.