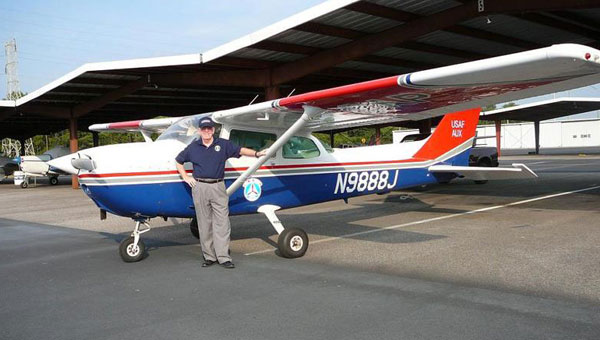 Jerry Sharp with the Cessna 172, a workhorse for the Civil Air Patrol for many years. (Contributed)

As a young boy in the ’50s, Jerry Sharp began chasing dreams as his dad shared stories of traveling around the world in the Navy.

His dad pulled out trinkets and handmade wooden boxes brought from Japan as he talked of Marianas Turkey Shoot and other World War II campaigns.

Sharp still remembers the wonderful fragrance of the wood.

As his “hero dad” talked of Pearl Harbor, joining the Navy at 17 and described the seven major and 11 minor battles he fought in the Pacific, it whetted Sharp’s adventurous appetite.

“I always dreamed of being a fighter pilot in the Air Force,” Sharp said. “So I headed for Lackland Air Force Base two days after graduating from Woodlawn High School in 1965.”

Sharp was ready for adventure, but the Air Force was uneventful until the winter of ’68.

Sharp was sent to Seoul, Korea, following an incident with the Pueblo, an American spy ship.

His remembrance of Kimchi, a pungent Korean dish of cabbage, peppers and spices that ferments in the ground for six months, was “Whoa, did that stuff stink!”

After his military discharge in 1968, he traveled to Russia, Ukraine, Japan, Panama Canal, the Dominican Republic, Mexico, western Canada and 31 U.S. states. He hopes to visit Germany, England, Spain or Thailand.

Sharp was a patrol officer with the Birmingham Police Department from 1971-76, then served in the Army National Guard from 1980-95. He received a private pilot license in 1968. After moving to Calera in February 1994, he operated Sharp Tax and Accounting for nine years and was employed with Ameriprise from 2003-2010.

In 2006, a client inspired Sharp to join the Civil Air Patrol.

“I am currently with unit 127 located at the Shelby County Airport. The program is military and aviation oriented, so it’s wonderful for young people.”

CAP is an all-volunteer organization and has three duties: aerospace training, cadet training and emergency services. What lured Sharp to CAP was the idea of one day finding a lost hiker or downed airplane.

The fact that he wouldn’t get paid doesn’t matter, doing something with purpose does. Information about CAP can be found at Gocivilairpatrol.com.

“Lately I’ve wondered what it would be like to be a crew member on a destroyer. I’d like to fly a Cessna Citation to 41,000 feet and fly the P51 Mustang, but right now I’m happy just getting back up to speed as a pilot in the Cessna 182.”