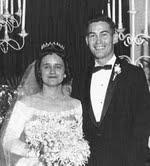 Their sons, daughters-in-law and grandchildren want them to know how much they love them, appreciate them and are inspired by their love for one another and their love for the Lord. Happy Anniversary!