Mary LaMaster Hixson was born in Henry County, Kentucky but raised east of Louisville, Ky. for the next 12 years. Her family moved to Lexington, Ky., where she graduated from high school in 1943.

At the University of Kentucky, she majored in fine arts.

She met Roy Hixson on a blind date while attending the University of Kentucky.

Roy had served in the military and then came to college.

They attended a fraternity function on their first date and later married on Dec. 20, 1949.

Roy Hixson was a man ahead of his time. Instead of getting his degree and taking a job for life (as many did in that era) Hixson was always on the look and listen for something that sounded bigger and better or even “just exciting.” There were moves to Lexington, Lawrenceburg, Franklin, Paris and Nashville, Baltimore and New Orleans. As each move came about, Mary was the wife who dutifully said, “where and how much time do we have?”

Several times the Hixsons lived out in the country on several hundred acres of land. She had no second car.

As Roy traveled, she watched the horses, cattle, sheep and soybeans and raised three kids through accidents and illnesses. The Hixsons lost three little girls at seven-months gestation. 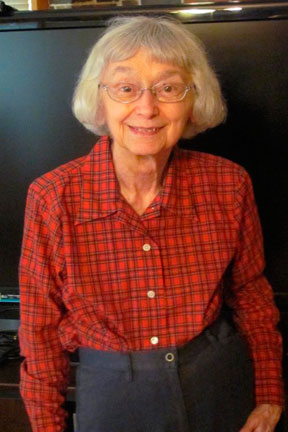 Mary Hixson at her home in Alabaster. (Special/Sandra Thames)

As her children got older, Mary began to get involved with the PTA. She also fixed up her farmhouse, joined church circles, attended youth camps, taught Sunday school, joined the D.A.R. and was a devout member of Disciples of Christ Church, chairman of the educational committee and even maintained a sense of humor about their “gypsy life.”

Son Ben lives in Weatherly, and for the last several years has wanted his parents to move to the Alabaster area. In December of 2007, they made the move. Soon they became beloved members of First Presbyterian in Alabaster. In October of 2008, Mary went to a local doctor about severe pain and a lump she had found. She did not tell Roy because they had a big trip planned and she didn’t want to “mess that up.” She had a bone density test and, unfortunately, the results were misdiagnosed. Two months later, they found the cancer spots in her backbone at UAB. Just another way God was looking out for Mary, as she had already been through breast cancer and several surgeries.

At present, her Princeton oncologist has the pain and cancer under control, and Mary continues her ministry with a smile and a “how are you” to everyone.

On Easter Sunday, April 12, 2009, the First Presbyterian congregation was told that the Hixsons had been in a wreck on their way to church. Roy had been airlifted and Mary taken by ambulance to UAB.

The resulting news was devastating. Roy was dead, and Mary had 10 fractured ribs, a split spleen and various other injuries. Sixty-one years together, three surviving children, eight grandchildren, three step-grandchildren, one great-grandchild, dozens of moves, heartbreaks, joys and a lifetime of love were left for Mary Hixson to ponder.

Mary has a sharp memory, a dry wit, a delightful laugh and an aura about her that has to be the strength of God. She believes and I quote, “I trust in God to take care of me and in thankfulness I do what I can to help and to serve in this world.”

This is a godly woman who gave her time and support to her husband and family and never wavered in her faith through surgeries and illnesses, many moves, the loss of children and finally the loss of her beloved husband. She is an Easter inspiration.

By SANDRA THAMES / Community Columnist If the name Ronnie Rasp is not familiar to you, you probably weren’t in... read more