Transported by the performance 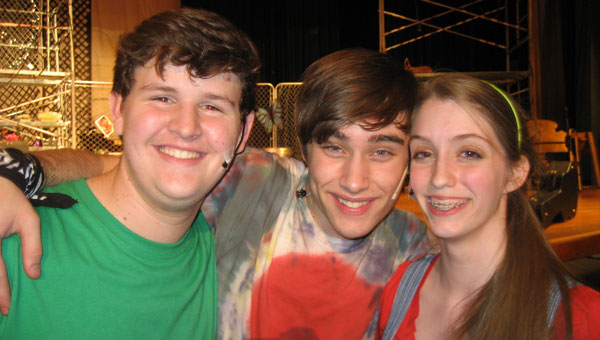 Lacking a sideline, Stephenson and I stand as “Godspell” begins. She whispers, “Sound, sound!” and “What did he say?” and I ignore my friend. Stephenson isn’t watching the play; she’s directing. I am part of the audience and, although Stephenson and I will sit together when we finally sit, I won’t be much company. Transported by the performance, the incredible musicians and the talented vocalists, I barely hear Stephenson directing. Both the story of “Godspell” and its music are familiar, but this year’s PHS ensemble cast makes the story its own. Watching seniors Courtney Chandler, Mathew Tkacik, CJ Stackhouse and Jeremy George, along with the other cast members, open this timeless musical, the power of the story takes over. Transported through the gospel, the audience is moved by “Godspell.” Assistant Director senior Sadie Foster said, “Seeing the story of Jesus Christ on stage inspires people to evaluate their relationship with God, and that’s a very emotional experience.”

The emotional experience intensifies when Jennifer Bozeman and Maddie Harper sing “By My Side.” These talented vocalists deliver a powerful duet. Bozeman said, “Maddie and I sang this beautiful song in the second act when the characters realize that they will lose Jesus.” As the girls sing, their friendship is comforting — even as they prepare for unspeakable loss.

The song asks, “Where are you going?” and the response is “Far beyond where the horizon lies…where the land sinks into mellow blueness.” Ultimately, the song concludes with a promise to take and warm the cold hand and to be “finally glad that I am here by your side.”

Last weekend, Pelham High School’s fine arts department’s presentation of “Godspell” was a sweeping success transporting audiences to a new level of thankfulness for triumph over despair-and for the beauty of having those we love by our sides.

Community comes together to save ice