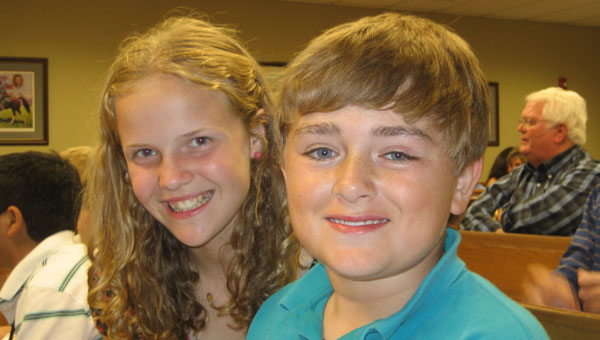 Valley Schools’ teachers have a legacy of being ahead of their time. About 30 years ago, fifth-grade teachers planned government lessons that their students would never forget.

Adding a dimension to their studies, students became familiar with their city’s inner workings and were offered the chance to run for a spot as a Pelham public official or city employee.

Today, this tradition of connecting the classroom to city hall continues.

Through the years, kids have thrown their names in the hat, written speeches, made posters and talked to voters. After the elections, all students take a field trip to Pelham City Hall, connect with their city leaders and see first hand the teamwork necessary to keep their city running smoothly.

Those students elected to office work closely with the city employees or officials whose jobs they’ve made a run for and then return to a Pelham City Council meeting in the evening to report on their day and participate in local government.

This year’s fifth-grade class had legacies continuing a family tradition of seeking office. One of those families was the Pierce family.

Older brother Ty Pierce, now a Pelham High School junior, held the spot of human resource director when he was in fifth grade.

Current fifth grader Will Pierce said, “When Ty told me how much fun he had hanging out with Mr. Jerry Nolen, I knew HR director was the job for me.”

Will Pierce served as HR director as his older brother had a few years before. What was the younger Pierce’s favorite bit of knowledge from his day as HR director? Pierce said, “I liked knowing that all people have to pass a drug test before they come to work for the city of Pelham. You can’t be on drugs if you want to work for Pelham.”

Pierce said, “I found out that you have to behave if you want a job. If you don’t act right, you can’t work for our city.”

Surprising their principal delighted these students.

Leadership rich with humor, encouragement and celebration of our citizens reveals that these young officials have mastered the camaraderie and kindness of Pelham.

Transported by the performance