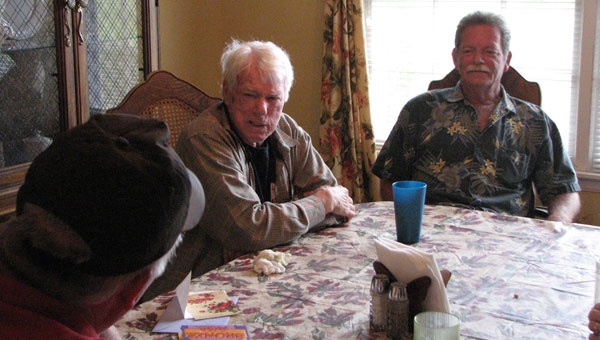 Joel Bearden chats with son-in-law, Steve Peoples, and other friends and family on his 80th birthday. (Contributed)

While he parachuted out of an airplane on his 75th birthday, he chose to keep it a little calmer this year. He stayed at home and had lunch with his family on the farm. (He was probably much safer that way.) The featured dessert was an Auburn football cake with the number 80 on it.

The Bearden Farm sits on top of a hill in Helena on Shelby County 261. The original farmhouse was built in 1929.

Many of the 100 “immediate” family members still gather at their mother’s and father’s house once a week to eat lunch together. It has been a long-standing tradition and one that just happened to fall on the Commissioner’s birthday this year.

Joel’s family is one of the closest families I have ever seen. It is obvious by their fun-loving behavior when they’re together and their rallying around each other when the inevitable troubles of life arise.  If one of them is down, the others are there to lift them up. They truly are all for one and one for all — all 100 of them.

There is no greater camaraderie anywhere, including the U.S. Marine Corps. Such was evidenced earlier this year when Joel’s daughter, Jan, died followed by the death of his wife, Peggy, only three months later.

While sadness and grief still exists for him, as it does any person in that situation, he has a larger-than-life support system that surrounds him with love.

With the help of his friends and family members, he carries on living an active life and serving the people of his district.

In his spare time, Joel is known for riding four wheelers and dirt bikes up and down the beautiful landscape that he calls home. He loves to scuba dive, camp, attend church and the athletic events of his grandchildren and great-grandchildren.

The oldest living male of the six-member original family, there is no doubt that he is the patriarch and is much beloved by everyone who knows him.

He has served Shelby County for years and continues a rich tradition of service to our community.