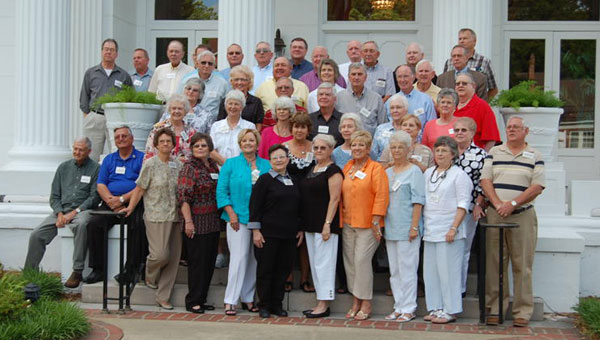 Governor Robert Bentley and First Lady Diane Bentley hosted the 50th reunion of the Shelby County High School’s Class of 1961 at the governor’s mansion in Montgomery on May 14.

Forty-five of the 48 seniors attended with their spouses the much-anticipated event.

Planning for the event began more than a year ago.

Gov. Bentley and the First Lady greeted each classmate.

Former Docent Carol Hill, wife of State Rep. Mike Hill of Columbiana, spoke to the group about the history of the Governor’s Mansion. Hill is also the daughter-in-law of Elvin Hill, principal of Shelby County High School in 1961 and retired superintendent of the Shelby County Board of Education, whose health did not permit him to attend. Former teachers Robert Hughes (agriculture) and Mrs. Barbara Joiner (speech) attended.

Dorough gave the formal welcome to the reunion classmates as they met in the mansion’s foyer in front of the grand staircase.

“To us, the governor will always be Robert,” welcomed Dorough. “To others, Robert is now Governor Bentley.”

Gov. Bentley personally inscribed a copy of his inauguration booklet for each of his classmates as a memento. The classmates feasted on a traditional BBQ dinner with all the trimmings: baked beans, potato salad, cold slaw, blackberry cobbler, strawberry shortcake and vanilla ice cream.

Classmates told stories and recounted their days at SCHS.

Gov. Bentley brought classmate and friend Neil Weir up to the front. Bentley told his classmates that everyday Neil and I went to the Dairy Queen and Neil always loan him a quarter for ice cream.

Bentley presented Weir with an autographed $20 bill for all those ice cream cones, to the delight of the crowd.

“It was a very relaxed and wonderful night,” Vick said.

“The word to describe the feeling of each classmate attending was proud — so very, very proud,” Dorough said. “It was a special feeling, and we were all so honored to be there.”

At the 2011 Alabama Daughters of the American Revolution Convention, parents Thomas and Donna McCully with daugher Marla after she... read more