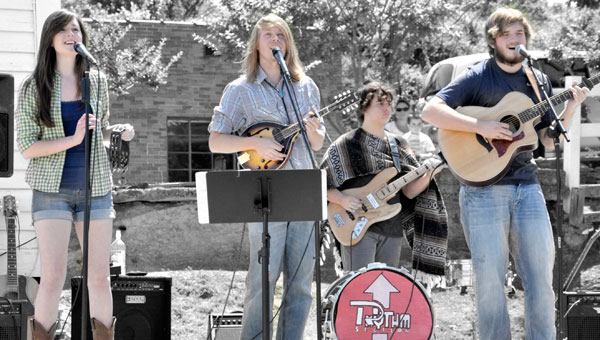 Originally friends in Cub Scouts, Tyler Kelosky and Nat Smith gravitated back to their earlier friendship in high school and found both had developed similar musical interests. Joining with Brian Renninger, they decided to form a band.

Now juniors, the three friends, who first played rock and blues have now evolved to what Renninger terms ‘ambient folk’.

“We have gone through about twenty names since we started,” Kelosky said. “Humble Peas, Children of the Mountain. We were calling ourselves Copper Planet, but a typo called us Copper Mountain and we like that better.”

Nat Smith has played guitar since sixth grade and now added mandolin. He is into Wild West culture, and if he could be any musician in history, he would pick Marty Robbins.

“I also play the fool,” he added. “And you will want to know that my favorite ice cream is strawberry in a mug.”

Tyler Kelosky, Copper Mountain’s modest bass guitar and bass drummer, claims his brother’s poncho as his performance wear of choice. He prefers mint-chocolate chip in a bowl and might consent to be Paul McCartney.

“Tyler is a prodigy. He can pick up any instrument and play it better than half the people that have ever played it,” Nat Smith said.

Brian Renninger plays guitar and banjo and sings. His trademarks are his beard and his flannel shirts, and he goes for chocolate ice cream in a bowl. He likes the Fleet Boxes and says given a choice, he would be Bob Dylan.

Cheered on weekly by her band mates and placing in the top four of the recent Helena Idol, sophomore Meghan Farrell joined Copper Mountain at the invitation of Nat Smith.

Farrell learned guitar in fifth grade, but found singing to be her passion. Having studied voice for the past three years, she foresees extending that interest into her college studies with plans to become a vocal coach.

She is also currently the PHS jazz band vocalist and picked Billie Holiday as her musician to emulate. And, she takes her coffee ice cream in a cone.

All the band members, who have a cadre of supportive parents, plan to extend their musical interests into college and beyond.

As a group, they perform songs of a somewhat idiosyncratic nature — Ghost Riders in the Sky, House of the Rising Sun, Peggy Lee’s Why Don’t You Do Right and have co-­written some of the songs they perform, Reverie, Ballad 322, Revelations and Season. Catch them locally when you can.

By LAURA BROOKHART / Community Columnist If you noticed eight young girls doing handsprings and backflips at the entrance of... read more